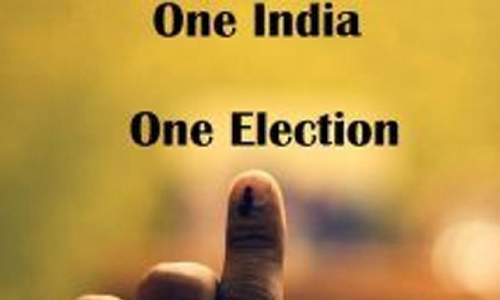 Addressing the fourth meeting of NITI Aayog, Prime Minister Narendra Modi again flagged the issue of simultaneous elections for parliament and state assemblies, calling for a widespread debate on the issue.

Addressing the fourth meeting of NITI Aayog, Prime Minister Narendra Modi again flagged the issue of simultaneous elections for parliament and state assemblies, calling for a widespread debate on the issue.

Why Simultaneous Polls
The primary argument for mooting such an idea is that it will cut down on the cost of elections in terms of both time and money. The advocates of simultaneous polls argue that frequent elections impede development and welfare as governments are periodically subject to code of conduct for elections and political parties remain perpetually in election mood.

Political populism is dampening the economic development. In a bid to lure voters, political parties resort to promising many populist measures thus channelising away the resources from long-term development.

Frequent elections further compound these constraints on development. Thus, the idea of simultaneous elections is mooted as an antidote to the political instability and perpetual politics induced by multiple elections.

The argument in defence of such a proposal is that simultaneous elections would save money, time and resources. If this is accepted, one can also demand that elections should be held once in 20 years as it would save more time and money.

Against Federalism
The proposal to hold simultaneous polls is unconstitutional as it goes against federal principles. Federalism forms part of the basic structure of the Indian Constitution and, therefore, even Parliament has no power to amend it. Holding elections to the Lok Sabha and state assemblies simultaneously tramples upon the rights of the states. This tantamounts to coercive federalism, not cooperative federalism. The state legislatures in India do not owe their existence to Parliament. Instead, both the state and the national legislatures draw their powers and functions from the Constitution of India.

Constitutional Void
In an age of fragmented polity and fractured verdicts, with each state having distinctive electoral arithmetic and political chemistry, which again is different from that of the Centre, any attempt to club these will create a constitutional void. If any state elections fail to throw up a clear mandate making government formation impossible, should we wait for the full term of the Parliament to lapse to conduct Assembly elections in such a state? Similarly, if all the states witness a clear mandate and the verdict is fractured in Lok Sabha elections due to which no government is formed, should all the state Assemblies be dissolved to facilitate simultaneous elections? Thus, such an idea is simply impractical.

Impractical Proposal
It is nearly impossible to implement, as it would mean arbitrarily curtailing or extending the term of existing legislatures to bring their election dates in line with the due date for the rest of the country. Even if it is done for one time to facilitate simultaneous polls, it cannot be done always. Such intervention is nothing but subversion of people's mandate which is for a particular period of time.

While expressing lack of confidence in one government, members of the legislature will have to repose trust in an alternative. It also suggests that premature dissolution of the House could be avoided if all members sit together and elect a leader. But, such reforms can also be implemented even without simultaneous polls. However, such regulatory provisions would undermine parliamentary scheme and deprive the opposition of right to move no confidence motion.

Distributing Power
Constitution envisages different layers of governance. The 73rd and the 74th constitutional amendments created a third layer of government in the form of local self-government. This was precisely aimed at distributing political power at different levels and among different players to avoid authoritarianism. Therefore, simultaneous polls militate against the constitutional vision and strengthen despotic tendencies. The constitutional checks and balances will be endangered.

Making Parties
Accountable
Frequent elections need not be a bad idea, as political parties would have to be eternally accountable. Otherwise, there is every danger that the elected representatives would be away from people for five years.

Whither Cost?
As Praveen Chakravarty wrote in The Hindu, the Election Commission incurs a total cost of roughly Rs 8,000 crore to conduct all state and federal elections in a span of five years, or roughly Rs 1,600 crore every year. Nearly 600 million Indians vote in India’s elections, which means that it costs Rs 27 per voter per year to keep India an electoral democracy. To put this in context, all the States and the Centre combined incur an annual expenditure of much over Rs 30 lakh crore. Surely, 0.05% of India’s total annual expenditure is not a large price to pay for the pride of being the world’s largest and most vibrant electoral democracy.

The Law Commission recommended for categorising States based on proximity to the next general election, and for having one round of State Assembly polls with the next Lok Sabha election, and another round for the remaining States 30 months later. This would mean that India would have a set of elections every two-and-a-half years. But, even this would entail arbitrary synchronisation of elections to legislative bodies that goes contrary to the principles of representative democracy

The Way Out
Better solutions exist for the problems which are cited to justify simultaneous polls. These include electoral reforms like state funding of elections and modifying the election code of conduct. Further, reforms should be made in the political party system through which parties do not excessively depend on the prime minister, chief ministers and ministers for election campaigning.

Suitable measures can be devised to cut short the period of electoral process. For instance, now, elections are held in several phases due to lack of adequate paramilitary forces to provide security for the polls. The strength of the same can be augmented to hold the elections in a day or two. The period of the election campaign can also be reduced. Certainly, there are problems with frequent elections. But, the cure cannot be worse than the disease.