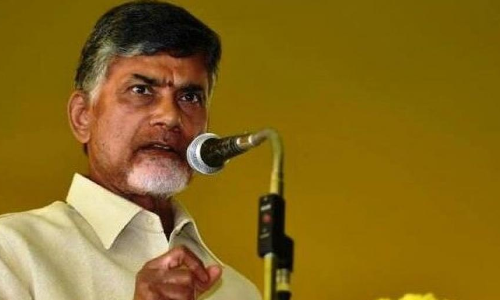 While launching a fierce attack on the BJP-led central government, Chandrababu Naidu at the recently concluded Mahanadu pitched for a key role for TDP in the national politics post-2019. His unsparing and no-holds-barred attack on BJP fuelled enough speculation on whether Naidu will ally with Congress in the post-poll scenario, if not in the pre-poll setting.

While launching a fierce attack on the BJP-led central government, Chandrababu Naidu at the recently concluded Mahanadu pitched for a key role for TDP in the national politics post-2019. His unsparing and no-holds-barred attack on BJP fuelled enough speculation on whether Naidu will ally with Congress in the post-poll scenario, if not in the pre-poll setting.

The astute politician in Naidu wouldn't have scripted such an onslaught on BJP without any political strategy.

2014 experience
In fact, locating in the right national context helped TDP make a remarkable comeback in Andhra Pradesh politics post-bifurcation after a decade-long stint in opposition and a debilitating defeat in the byelections in 2012 in the hands of the then fledgling YSR Congress.

The sense of helplessness nurtured by all the parties to sell their narrative over the bifurcation also created feeling that they need a strong and experienced leader who enjoys the Centre’s liberal support to lead them to come out of the wounds inflicted by the arbitrary bifurcation.

Chandrababu Naidu could successfully market himself to be the right choice in such a context. His alliance with Modi who was already expected to win the national mandate further helped him.

Writing in Economic and Political Weekly (July 12, 2014), this author, explaining the reasons for Naidu's comeback, said: "The sense of helplessness strongly instilled in the Seemandhra electorate in turn also generated a feeling that the residual state of Andhra Pradesh desperately needed help from the central government.

Naidu demonstrated consummate political skills by arriving at an early understanding with the Narendra Modi-led National Democratic Alliance (NDA) and converted the threat into an opportunity. The strong Modi sentiment evident across the country convinced the average voter in the Seemandhra region that Chandrababu Naidu could form part of a winning combination at the Centre and could deliver for the truncated state without a capital."

Countdown to 2019
To locate himself in the right national context, Naidu also used Mahanadu as an opportunity to convince the electorate that TDP would play a critical role in 2019 when it comes to formation of new government in New Delhi.

Such an assertion, notwithstanding its possibility, is not without an underlying political strategy.
The TDP is no longer with the BJP that is in power at the Centre. The sense of helplessness is still nurtured for a political project. Naidu now desperately needs to convince the electorate that his political estrangement with BJP will not harm the interests of Andhra Pradesh. This demands an assertion from Naidu that the TDP will play a key role in the new political dispensation at the Centre in 2019.

The national political situation has now altered drastically much to the disadvantage of TDP. During the days of the United Front and National Front, the Indian national polity was dominated by the Congress at the Centre and all the other parties in the periphery. There was no serious national challenger for power.

The BJP was still at an emerging stage. In the absence of a strong anti-Congress national party, a regional party like the TDP could obviously play a vital role in anti-Congress politics. Now, the regional parties have not only increased in number, but their strength in their respective states has substantially increased.

The united Andhra Pradesh had 42 seats, making it possible for the TDP to win a significant number of seats during its heyday. But, the residuary state of Andhra Pradesh in which the TDP political clout has reduced, has only 25 seats. The TDP no longer enjoys sweeping political influence even to win a sizable number of seats.
The polity of united Andhra Pradesh was divided between the Congress and the TDP, giving the latter a respectable stature in the anti-Congress politics of the country. But, the politics of the residuary state of Andhra Pradesh is polarised between the two regional parties, TDP and the YSR Congress. The national parties of today have the ability to choose either of the regional parties as its ally.

The frequent change of sides by the TDP has substantially eroded the credibility of Naidu as a trusted ally in the national alliance. He claims a critical role for TDP in national politics as a clever strategy to woo the electorate that still feels the Centre's liberal assistance is essential for the truncated state to come out of the bifurcation-induced fiscal challenges.

Whither alliance with Congress?
Naidu's hate for Modi cannot be automatically interpreted as love for Congress though such a possibility post 2019 cannot be summarily ruled out.

TDP still believes that Congress, at least in the pre-poll scenario, is a liability rather than an asset. The people of Andhra Pradesh are not yet ready to forgive Congress.

Naidu's political strategy since bifurcation is centred around the narrative that Congress has arbitrarily divided the state. TDP hopes to continue its narrative around bifurcation. The only addition to the narrative will be how the other national party, BJP, too ditched the state. It is difficult for TDP to deal with Congress, at least before 2019 elections.

Targeting BJP
Chandrababu Naidu's tirade against BJP is a strategic masterstroke to convert a threat into an opportunity. Sensing possible antipathy due to his party sailing with BJP which reneged on its promises to Andhra Pradesh, Naidu raised his banner of revolt.

Chandrababu Naidu seeks to accomplish multiple objectives with one shot – making BJP a political untouchable in state politics, thwart any possible alliance between YSR Congress and BJP, divert the people's attention from YS Jagan Reddy's padayatra, ensure multi-cornered contest in the state to split anti-establishment vote benefiting TDP and tide over the possible anti-incumbency by diverting the people's anger at the Centre.

Chandrababu was one of the first allies of NDA to realise that Modi of 2019 is not the same as Modi of 2014. That his popularity is declining is evident from the recent bypolls. The allies of BJP are restless. The continuation of Shiv Sena, PDP and even JD(U) in NDA is not guaranteed unless the BJP reverses its losses in the ensuing Assembly elections in several states later this year. Remaining in Team Modi proved to be a liability especially at a time when people are simmering with anger over the denial of special status. The intransigence of BJP-led NDA rule towards the genuine demands of Andhra Pradesh has come in handy for Naidu to redesign his national political strategy.