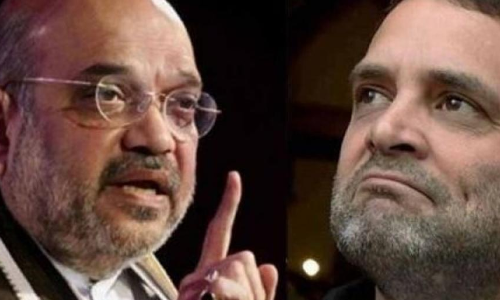 BJP\'s latest foray into North East means a serious challenge to the Congress that has been a dominant political force in this region. But, more than the electoral success of BJP, the grammar of politics employed by the saffron brigade could spell a disaster for the Congress if it fails to comprehend the true character of BJP\'s offensive.

BJP's latest foray into North East means a serious challenge to the Congress that has been a dominant political force in this region. But, more than the electoral success of BJP, the grammar of politics employed by the saffron brigade could spell a disaster for the Congress if it fails to comprehend the true character of BJP's offensive.

By presenting itself as a serious challenger to CPI(M) in Tripura, the BJP has virtually confiscated Congress organisational muscle and its support base. In Meghalaya, the party employing clever tactics facilitated rise of regional parties that have been co-opted into NDA so as to put an end to Congress rule.

In Nagaland, the BJP was in the ruling combine led by NPF and had a seat sharing with the opposition NDPP. Thus, it captured power by containment of competing allies. This political paradigm of the ruling BJP should worry Congress more than the electoral success in this North East region that accounts for only 25 seats in Lok Sabha.

The BJP is normally perceived as Hindu-Hindi party and as primarily North Indian entity. But, contrary to this, the BJP-led NDA could replace Congress regime in Christian-dominated State like Meghalaya. Similarly, its success in Christian-dominated Nagaland reveals the potential of its political and electoral paradigm.

The Congress had been presenting a feeble challenge to the dominant Left in Tripura. The political analysts interpret this to be a result of Congress disinclination to take on the Left in any serious manner due to its dependence on the latter in the national politics. But, more than this the failure of the Congress to seriously challenge the Left stems out of the fact that the party could not match the Communist organisational muscle. Precisely, here, the BJP could strike.

The saffron party which is the principal ideological adversary to Left has invested enormous organisational and financial resources to unseat the Left in its stronghold. Thus, the BJP could swallow most of the Congress bases. Without this, the meteoric rise of BJP couldn't have taken place in Tripura.

The anti-Left vote was primarily that of the Congress while the BJP had a negligible presence. With the rise of Modi and the BJP at the Centre and the party taking Tripura as a crusade emboldened the anti-Left sections which completely gravitated towards BJP thus decimating the Congress. Added to this, the erosion in the Left support base due the anti-incumbency helped the BJP to register a spectacular success in the Red bastion.

More than the Left, the Congress needs to be worried of this phenomenon more. The BJP will employ serious political tactics in West Bengal and Kerala, too. The Congress has already suffered deep erosion in West Bengal. Kerala will be the BJP's next target.

Similarly, the BJP may even target Congress in such states where it has a weak presence like in Andhra Pradesh. The party is trying hard to attract influential leaders from Congress to strengthen in Andhra Pradesh where voters are not ready to forgive and forget the Congress.

Knowing fully its limitations in alien political space like that of Meghalaya, the BJP kept a low profile and prompted its regional allies to take on Congress. The saffron party was more keen on hoisting the NDA government in Meghalaya rather than that of a BJP rule. In Meghalaya, the Congress managed to emerge as the single largest party, but the BJP, with two members, is helping the National People’s Party form the government.

In Nagaland, the party has enacted a strange political drama to come to power. The party won 11 seats. It was part of the government led by Naga Peoples Front (NPF). But, it had seat sharing agreement with Nationalist Democratic Progressive Party (NDPP), a breakaway group of NPF. Thus, it had kept its options open. This is evident from the fact that both NPF and NDPP were keen on forming a government with BJP as their partner.

A similar type of political tactics is employed in Andhra Pradesh. The BJP is part of the government led by TDP. Yet, it criticises the Chief Minister more than it targets the opposition. The party has good chemistry with the opposition YSR Congress which voluntarily supported BJP nominees in both Presidential and Vice-Presidential elections.

The BJP has entered into dangerous electoral understanding to achieve its objective of winning the elections. The Indigenous People's Front of Tripura which fights for a separate homeland allied with the BJP. The BJP while claiming to be committed to the integrity of state of Tripura allied with separatist forces like IPFT. The Congress earlier had such understandings. This only indicates the killer instinct of BJP to come to power. The Congress lacks such instinct to regain power.

The BJP has even modified its politics of beef eating to suit the peculiar conditions in the North East. Even the local BJP leaders made it clear that Uttar Pradesh-type of beef politics do not work in the North East region where beef eating is widely prevalent. The BJP has even appealed to the Christian majoritarianism in Meghalaya and Nagaland. It extended its support to the demand for separate East Nagaland. All this only indicates to what extent the BJP can stoop down to ensure its electoral success.

The BJP is desperate. It is losing its sheen in the states where it was very strong. The states like Rajasthan, Madhya Pradesh, Chhattisgarh etc., contributed significantly to BJP kitty in 2014. The BJP knows it pretty well that it is not going to be easy to retain this tally in 2019. Thus, the saffron brigade is desperate to compensate for these possible losses with whatever smaller gain that can accrue elsewhere in the country.

Thus, the party is proactive in securing allies. It jumped into the political arena to extend a hand of friendship to Rajinikanth while continuing its political chemistry with the AIADMK. It did not even leave the possibility of allying with the DMK too. Thus, the BJP kept all its options open in Tamil Nadu.

The Congress seems to be seriously lacking in such efforts to win over new allies. Thus, it needs to be extra cautious of the BJP's political organisational paradigm consummately executed by shrewd leadership and committed cadre. Leisurely politics of the Congress cannot challenge the BJP juggernaut. The sooner the Congress realises this, the better for the party.