TDP caught in a bind 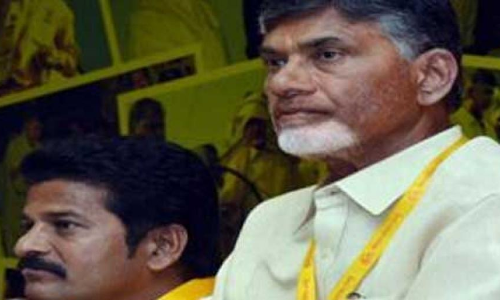 The party that has lost a lot due to bifurcation of state is certainly the Telugu Desam Party (TDP). The party launched by matinee idol NT Rama Rao, who blazed a trail in championing the cause of Telugu pride in the corridors of power in Delhi, registered a historical win in the early 1980s. It is true that Telugus, who were until then lapped up under the facetious umbrella term ‘Madrasis’ in the

The party that has lost a lot due to bifurcation of state is certainly the Telugu Desam Party (TDP). The party launched by matinee idol NT Rama Rao, who blazed a trail in championing the cause of Telugu pride in the corridors of power in Delhi, registered a historical win in the early 1980s. It is true that Telugus, who were until then lapped up under the facetious umbrella term ‘Madrasis’ in the North, got a distinct identity only after NTR founded the TDP and created ripples in the political history of India with a spectacular win.

The party then played a remarkable role in galvanising anti-Congress forces. At one point of time in contemporary Indian political history, it was the cynosure of all eyes and a cementing factor of national opposition unity. The conclaves it held and presided over, the struggles it waged against the centralisation of power at the Centre due to the unitary character of the ruling Congress, which was then in power in many states, significantly inspired federal forces in the country to find ways of consolidating their base.

Again, in 1990s, the TDP led by N Chandrababu Naidu was the first to embrace the first wave of economic reforms. Even the World Bank hailed him then as a leader with unflinching commitment to the path of reforms who braved political risks associated with it.

But, unfortunately for the party, Bretton Woods institutions do not determine the people’s mandate in the state. The right-wing economic policies, devoid of any commitment to welfare measures, inflicted serious political wounds on the party that otherwise seemed invincible then. The decade-long subsequent stint in the opposition benches certainly taught a few important lessons to the party.

It still steadfastly remains a party opposed to Congress, despite the aberration during the United Front experiment at the Centre. It sharpened its anti-Congressism as it opposed what it described as an arbitrary division of the state. It cleverly chose its allies. More than all this, the TDP, having learned suitable lessons from the past defeat that condemned it to the status of an opposition party for 10 long years, has moved away from its strident reformist path. It tried to rather give its economic policy a populist touch. The post-bifurcation dynamics has proved to be a mixed bag when it comes to advantages and disadvantages for the party.

Had bifurcation not been an issue, it would have been difficult for the party to revive its fortunes at least in the truncated state. For, the same bifurcation created a congenital disorder for the party in the new state of Telangana.
Of course, the party could turn the tables in the residuary Andhra Pradesh within two years of its unholy defeat at the hands of the then fledgling YSR Congress in a series of byelections in 2012. This remarkable turnaround wouldn’t have been possible if the party had not consummately handled the post-bifurcation emotions that gripped the Seemandhra people. But, the same emotions have been dearer for it in Telangana as one can’t make an omelette without breaking eggs.

The TDP is seen in Telangana as the party that will eternally be under Seemandhra leadership. Such perception becomes even stronger in Telangana, where a regional party is in power and that too one which had spearheaded the movement for separate statehood in Telangana in clear unambiguous terms right from the beginning. The Telangana TDP finds it extremely difficult to wriggle out of this position.

Thanks to the controversial ‘note for vote’ scam, the TDP supremo finds it inconvenient to lead the Telangana party too from the front. The unending controversies rocking the two Telugu states further vitiate the political atmosphere for the Telangana TDP.

The veneer of amicability between the two Chief Ministers, even as the Telangana TDP takes up cudgels against the ruling TRS at the drop of a hat, further confounds the situation.

Despite alliance in Andhra Pradesh and at the Centre, the Telangana BJP refuses to extend a hand of friendship to the Telangana TDP. The TBJP feels that any proximity with TDP is detrimental to its political interests as the latter is often described as the party led by ‘outsiders.’

The Left is in the Opposition camp in neighboring Andhra Pradesh, where TDP is in power. These national parties cannot so easily take distinctly different political stand in Telangana concerning TDP.

Against this peculiar backdrop, the Telangana TDP is really groping in the dark as far as chalking out its political strategies is concerned.

The party has not all along remained closely knit in the state. Desertions from the party, because of alleged poaching by the ruling TRS, further weakened the TDP in Telangana. Yet, it has a few strong leaders in some select constituencies.

Given this confusing political climate, the party chose to join forces with the Congress to back the CPI-led AITUC in the recently concluded Singareni Collieries trade union elections, which, in terms of the stakes involved, resembled almost the general election. Thus, the outcome of the Singareni elections is seen by political pundits as a precursor to the political landscape that could emerge in the state in 2019.

As things stand, the party seems to be finding it hard to stomach a Mahagathbandhan-type formation with the Congress in the lead place. The contradictory utterances by the influential leaders of Telangana TDP reflect this anomalous situation.

Quite interestingly, in many of the constituencies where TDP has reasonably strong leaders, the principal opponent is the Congress rather than the TRS. In fact, some of them are even sitting seats of the Congress. This makes the prospects of a political adjustment with the Congress even more irksome for the TDP.

With the BJP unrelenting, the TRS being untouchable and the Congress unacceptable, the Telangana TDP is in a bind. It can’t go it alone. Proactive moves by the TRS leadership further bewilder the party. A section wants the party to be with the TRS as it could then win a few seats.

But, the TDP leadership is yet to make up its mind as alliance with the Telangana ‘regional’ party can send confusing signals in Andhra Pradesh, considering that the controversies between the two states remain and the wounds of bifurcation are not fully healed.

Even the TRS may not prefer a tie-up with TDP. It would rather welcome defections from the TDP. Thus, the Congress seems to be its natural ally if a united opposition conglomerate comprising Congress, Communists and TJAC materialises. The Andhra Pradesh TDP can then explain that its Telangana unit has no direct alliance with the Congress. In any case, dissensions within the party seem to be inevitable.