In defence of myself 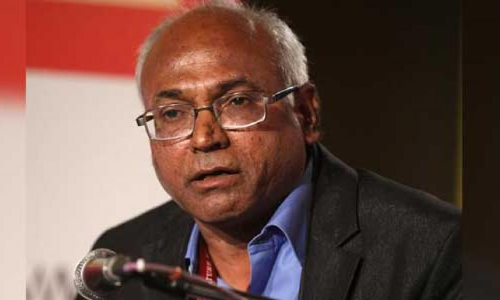 Last week, in these columns, I expressed my opinion on Prof Ilaiah\'s book that infuriated Vysyas. The article titled, Missing the Woods for the Trees, has, to the best of my ability and belief, tried to make an honest assessment of the subject. I dealt at length on my areas of agreement and disagreement with the author.

Last week, in these columns, I expressed my opinion on Prof Ilaiah's book that infuriated Vysyas. The article titled, Missing the Woods for the Trees, has, to the best of my ability and belief, tried to make an honest assessment of the subject. I dealt at length on my areas of agreement and disagreement with the author.

Prof K Nageshwar who comments on every socio-political issue cannot enjoy the luxury of remaining silent, that too when, speaking on a television channel, Prof Ilaiah specifically referred to my name and sought my opinion. He has invited for a debate and rightly so.

There are instances of Arya Vysyas reacting in an objectionable manner. No author should be humiliated. No physical attack is acceptable in a democracy. It is true that the Vysya community as a whole might have felt humiliated. But, as I wrote last time, hurling abuses or physical threats are highly reprehensible that too when people in Parliament and legislature makes such comments, it is much more deplorable.

The Vysyas should also appreciate that, however caustic they may feel the book to be, none can in anyway indulge in acts of humiliation or intimidation of the author. Such an emotional response would only harm their cause. This is the unequivocal stand I took even in my television programme.

If one book can cause so much pain and however justifiable it may be, the Vysyas should also realise the pain and agony felt so deeply by the members of those castes who were denigrated for ages for no fault of their own in this caste-ridden religious hierarchy. But, none can claim to be the sole representative of the socially oppressed. It is the responsibility of every human being to reject this degrading and debasing caste system that has hindered the progress of this nation.

But, the question is how we should run this social discourse. There cannot be a caste revenge for the archaic social practices. For instance, India suffers from gender discrimination that is prevalent across all castes. But, the solution cannot be women declaring war on all men. Instead a united fight for gender justice is the solution.

It is wrong to say that the vestiges of old order have completely disappeared. It is equally wrong to punish this generation and all those in a caste for the misdeeds of earlier society. It is also much more erroneous not to realise the changes in the social and economic order in the 21st century. The society did not progress on social animosity and nor will it advance by resurrecting that caste-based hostility.

This has been my consistent position on the issue of caste. I have a right to have and express this opinion. Some may agree. Others have a right to disagree. But, that is the beauty of democracy. Both Ilaiah and Nageshwar have a right.

I have never questioned Prof Ilaiah's scholarship and nor will I do so now. I have only observed that some of the postulates in the book are sweeping generalisations and unsubstantiated assumptions that lack empirical evidence which is the basic principle of social research.

I have only expected a scholarly rebuttal to my last week's article either from the distinguished professor or someone else. As an editor who believes in India’s argumentative tradition, I would love to publish it in these columns any critique of my article as it contributes to democratic debate.

But, there was no confutation to my article. Instead, Prof Ilaiah chose a television show, in which I was not there and debate had nothing to do with me, to make certain personally derogatory remarks on me. Ilaiah's comments are not only uncivilised but even unlawful. Yet, I leave it to his wisdom. In fact, my television interview on HMTV a day after he made such personal attack on me stands testimony to my decency. I have only expressed my opinion with due regard and respect for the author.

I still feel that Ilaiah's thesis is from the prism of caste discourse and it will not contribute to the annihilation of caste, but only reinforces caste sentiment in a section of society.

I have a right to have this opinion and has a right to express it. But, unfortunately, Prof Ilaiah questioned my academic credentials and scholarship too. My modest contributions to academics and journalism are there for the world to see. I do not seek any certificate from anyone. I have no reason to compete with anyone.

I am not so disturbed even by this. But, I was called by my caste. If Ilaiah says, it is scholarly and scientific. But if Nageshwar says, should it be seen as casteist? Both should be seen as true interventions in social discourse. A debate and discussion is possible only if one respects the other.

In my long public life, I always stood for the exploited and the marginalised castes constitute most of those disempowered and disenfranchised. I stood for the rights of Anganwadis, Gram Sevaks, contract and outsourcing employees, unorganised workers, municipal workers, especially the sanitation workers, agricultural labourers, industrial workers, scheme workers etc. Never my caste was identified. I articulated the rights of Madigas, the most oppressed. My caste was never a point of discussion.

As a legislator, I was associated with any service activity whichever caste may organise it. No one has a choice of one's caste. In Indian society, one can convert to another religion. But, there is no provision to alter one's caste. The caste haunts even when one converts to non-Hindu faith. Then, how is it justified to read my opinions on this subject merely from the caste lens? I can still understand if one does so, as the caste prejudices are a reality in India. But, I cannot understand how a reputed academic can stoop down to a level of making personally insulting remarks just because he does not like the opinion.

Such unwanted and undesirable insinuations against me personally or at a particular caste by the author will not help the society and such an approach is unbecoming of his stature. Instead, one should focus on the fundamental questions plaguing the Indian society.

It is true, as the author asserted, that those engaged in the production processes were branded as lower castes by the caste-ridden social order. Their contribution to the evolution of knowledge needs to be celebrated. The old order should change. There is an opportunity in every crisis. That opportunity is an honest introspection of not only what went wrong but what has changed and what needs to be changed.

All forms of social and economic inequalities have to be questioned. It may be caste, class or gender, regional or ethnic, linguistic or religious. This requires a wider mobilisation for integrating the struggles against social and economic oppression. Any attempt to disrupt this class unity of the poor and the underprivileged should be rejected forthwith as such tendencies in ultimate analysis will help in reinforcing the unequal social and economic regime.

For reaffirming this, some may still intensify their attack on me by calling by my caste – one may choose to personally humiliate me and others may still describe this as my ideological marriage with class politics. All this only reflects the weakness of my critics and their total failure to engage with me in the realm of ideas. I only feel sorry for them and wish them all the good luck in their personally denigrating crusade against me.

All this will not deter me as I firmly believe in where the mind is without fear and where the head is held high and, where prejudices do not cloud our thinking. I only hope one does not discover, perhaps, a caste commonality between me and Tagore just because I chose to end my article with his quote.