Missing the woods for the trees 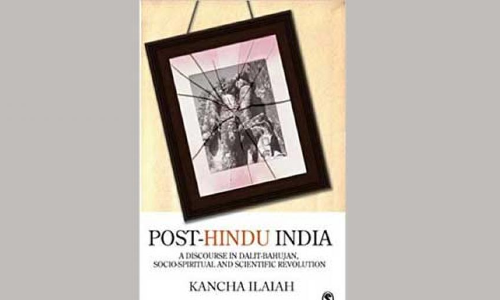 Prof Kancha Ilaiah\'s booklet on Vysyas has sparked off a controversy across the two Telugu states. The forces of right reaction that Ilaiah wants to resist seem to be capitalising on the simmering discontent among the community as a whole that feels badly humiliated by his writings. But, hurling abuses and even death threats against an author cannot be justified, however aggrieved one may be. Inst

Prof Kancha Ilaiah's booklet on Vysyas has sparked off a controversy across the two Telugu states. The forces of right reaction that Ilaiah wants to resist seem to be capitalising on the simmering discontent among the community as a whole that feels badly humiliated by his writings. But, hurling abuses and even death threats against an author cannot be justified, however aggrieved one may be. Instead, an intellectual appraisal of the assumptions and arguments of the author's work would be appropriate.

The very title of the booklet, ‘Komatollu as social smugglers’ sounds clearly derogatory. In fact, the name of the chapter in the English version of the book does not refer to the name of the caste. This clearly indicates the title of the Telugu booklet is deliberately made provocative. Such an attempt to provoke any particular caste by disparaging insinuation does not reflect the spirit of social sciences.

The booklet contains several sweeping generalisations and unsubstantiated assumptions. For instance, the author concludes that the 'Komatollu' represent the richest caste in India today. But, he offers no empirical evidence to substantiate his assertion. Such assumption devoid of empirical studies is unbecoming of a social science
research.

In fact, in the age of monopoly capital and finance capital, it is hard to believe that primitive mercantile capital would be the source of accumulation of unparalleled wealth. Prof Ilaiah propounds that this caste always hates the marginalised castes like SCs, STs and OBCs and inculcates this culture among their children.

It is true that the Hindu society is riddled with caste discrimination. The margianlised castes are discriminated against and exploited in this social hierarchy. The modern epoch also threw up new forms of caste-based discrimination. Despite changes in the society, the vestiges of old order are still rampant. Caste inequalities are the order of the day. Such an oppressive social order needs to be rejected and defeated.

This should be done by mobilising democratic sections in all castes. But, the author’s presentation has targeted all the individuals in a caste irrespective of whether or not they believe or practise and promote such archaic social values.

Such an approach foments hatred towards a particular caste rather than providing any sociological account of the evolution of the caste. Intra-caste cleavages exist in the caste-ridden Hindu society. The phenomenon of caste expresses itself in the Indian society in such an ugly form that it even dampens the unity of the oppressed castes. Even the OBCs practise untouchability in the villages. The Most Backward Castes (MBCs) are denied equal social status within what we call the Backward Classes.

The author draws a strange correlation between the food habits and the war competencies. This is illogical as the contemporary warfare is no longer based on muscle power. The present electronic and highly sophisticated technological warfare requires mind power rather than the muscle power. None not even the State can dictate food habits to any person or a community. It is a right to privacy. Those who question beef ban on this ground cannot also impose non-vegetarianism on anyone. It should be left to one’s personal choice.

Conclusions like this caste holds most of India’s cash, gold and silver reserves are not just sweeping generalisations but even ignore the intra-caste humongous inequalities. With the emergence of crony capitalism, and predatory finance capital, accumulation through trade is not so significant. In fact, most of the Vysyas are petty traders who eke out livelihood with little or no margins. Branding all the individuals in a caste as exploiters is irrational and only signifies caste prejudice rather than genuine repudiation of exploitative trade practices.

Kosambi held that caste is "class at the primitive level of production" and originated in latter Vedic times as varna divisions. But, over a period of time, this caste stratification in occupation has undergone significant changes. The Vysyas no longer hold a sway over the trade and businesses. Even in this caste, a few wealthy families control the businesses and trade leaving vast majority within the caste pauperised. This led to vast migration of this caste into other professions, especially the services sector. This is true even with land and asset-owning castes with a degree of difference. It is surprising that the author fails to acknowledge these changes.

He is right when he argues that the so-called Sudras and Adivasis were deprived of any ownership of means of production. This deprivation still continues unabated. The attack should be on exploitative modes of production and relations within the society rather than on the caste per se.

Such a broader unity of toiling classes across the castes can only defeat the iniquitous class regime, though there are significant similarities between caste and class in Indian context, and the struggle against the social and economic oppression needs to be integrated.

But, it is wrong to ignore the differences between caste and class in India. This is much more vital at a time when class formation is taking place within the marginalised castes too.

More so, the author justifies his thesis on the ground that Vysyas possessed hidden wealth concealed beneath the ground. And claims that such a practice is still continuing. This is far from reality. It is true that at a time when there were no reinvestment opportunities in the economy and the feudal social order did not allow them to own huge tracts of land which would have altered the class relations in the countryside, such means of hiding wealth might have existed.

Even today, we do not find Vysya land lords though the practice of caste discrimination still exists in this caste too. In fact, several Vysyas became martyrs in the Telangana peasant armed struggle against the feudal order.

The celebrated professor accuses this caste of being money lenders and misers. At a time when agrarian economy that sustained their trade was very backward and volatile, this culture of saving to safeguard the cash flow in the trade against economic vicissitudes has been acquired by the community involved in the trade.

This was the feature of early mercantile capital in any society in the world. The story of Shylock in The Merchant of Venice by William Shakespeare is an apt illustration of prevailing practices in the pre-capitalist societies around the world.

A social scientist has to look at the sociological factors associated with a particular caste and its specific cultural attributes rather than condemning all the individuals in a caste. The author is right when he argued about the appropriation of wealth generated by the hard labour of the lower castes. But, such appropriation is more a class phenomenon which had a caste expression.

But, the modern capitalist economy has introduced much more worst forms of class exploitation and appropriation on which this caste alone does not have any monopoly. Even if the marginalised caste persons are involved in such trade or production, the exploitative practices will not end. The problem lies in the economic system that perpetuates such an appropriation. Failure to realise this will only aim at replacing upper caste class exploitation by lower caste class exploitation. This cannot be the ultimate aim of any social movement that questions such an order.

The author enumerates in detail multiple forms of unethical trade practices and unholy forms of accumulation of wealth. But, the problem in his analysis is that he attributes this to one particular caste even today and fails to recognise that such practices are common in the economic system independent of which caste owns or runs the trade.

There is no empirical evidence to suggest that business or trade run by one particular caste or religion is ethically different from others. Instead of questioning such exploitative practices wherever they exist and irrespective of whoever do so, linking it to only one caste even in the current times is nothing but condoning the unethical trade practices pursued by other communities.

While analysing the origins of such practices and the reasons for their sustenance, failing to appreciate the changes in the contemporary epoch where trade and business is no longer the sole preserve of any particular caste is unacceptable. Karl Marx emphasised that capitalism is a self-driven system that is subject to a set of immanent tendencies. These tendencies are independent of human will and consciousness.

But, the author in his thesis tried to build a theory of consciousness independent of materialistic basis and, therefore, his attack is on the consciousness rather than material base.

The transcendence of caste-specific attributes is possible and even evident when the economic system changes. Instead an obsession with caste and its attributes would only strengthen the caste cleavage in the society ultimately helping in reinforcement of such a caste inflicted social order.

The author’s attempt to see even the freedom struggle and its heroes from a mere caste prism is ahistorical. As noted economist Prabhat Patnaik pointed out, if one remains exclusively within the framework of a caste perspective one would never succeed in overcoming caste oppression itself.