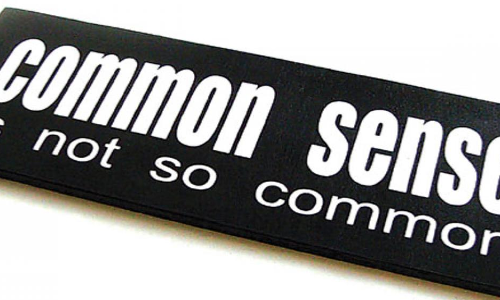 Once the Viceroy invited Gen Thimayya for a drink and asked him to choose his own brand.  But, the officer was unaware of the choices. Yet, he did not cut a sorry- figure. With his unparallelled commonsense, the General replied, ‘the best that you can offer, your Excellency’.

It is not just enough to be knowledgeable. One should have commonsense too

Humphrey Evans in his book 'Thimayya of India: A Soldier's Life', narrates an interesting anecdote related to this distinguished army officer.

Once the Viceroy invited Gen Thimayya for a drink and asked him to choose his own brand. But, the officer was unaware of the choices. Yet, he did not cut a sorry- figure. With his unparallelled commonsense, the General replied, ‘the best that you can offer, your Excellency’.

Nearly three decades ago, I had an opportunity to stay in a five star hotel in Madras. That was my first experience. I was completely unaware of the etiquette of a star hotel. The moment I entered the room, I saw many things on the wash basin. I neither knew the product nor their usage.

However, I was not ready to let go of the opportunity as I was not sure when I would get one next. An idea flashed in my mind. By sheer commonsense, I called the boy and said, ‘when I stayed in another star hotel last time, I did not find these things’. Bowled over by my compliment, he started demonstrating on how to use them.

I vividly remember an experience on my first visit to Hyderabad in 1978 just after completing my tenth standard. I went to a hotel to have my dinner, having come from a remote town, I really did not know many things. After dinner, the waiter brought finger-bowl. I was not sure what to do with it.

The only thing I knew till then was that hot water with a dash of lemon as effective in clearing the digestive disorders. Thank God, I did not do it. My commonsense told me that it perhaps was for something else. I waited for a moment, looked around other tables emulated what others were doing. Whenever, I recount this near-embarrassing experience, my children look astonished at my innocence.

Let me recall an experience with my grandmother. A massive number of activists descended around the disputed Ram Janmaboomi-Babri Masjid structure and pulled it down. On being asked the then prime minister replied that he did not think that they would resort to such an extreme act.

When I narrated this to my grandmother and sought her reaction, with battling an eyelid, she quipped, “when such a big crowd assembled there, what will they do if not pull it down.” Ostensibly, my grandmother’s commonsense was superior to the scholar-prime minister’s political sense.

I went to see my grandfather when he was critically ill. My grandmother asked me to put some drops of water into his mouth. The belief is that it will give divine blessings. I did so. Still I could not stop my curiosity. I asked the doctor whether it was right to do so.

“Have you done so?” the doctor anxiously asked. Apparently, he worried that when my grandfather was struggling to breathe, such acts could choke his respiratory system. Perhaps, our ancestors deliberately promoted such a myth to facilitate death.

It may be a form of euthanasia. But, It‘s highly unwarranted in the modern times. Do you know what my reply to the doctor was? ‘Am I a fool to do so?’ When I noticed doctor’s anxiety, my commonsense told me that it was wrong.

Read this Panchatantra story to understand the importance of commonsense for a successful life.

Long ago, there lived four friends. Three of them were learned and accumulated immense knowledge. But, the fourth one could not learn. He was considered ignorant. The four once went to a forest and saw bones and flesh of a dead animal.

The three intelligent friends said that they could bring back life into the animal with their knowledge. But, the fourth friend warned them that it was a lion. ‘If you save the lion, it can even kill you’, he cautioned.

The intelligent friends did not heed and went about their mission. Finally they fell prey to the lion once it was brought back to life. But, the not so intelligent friend with his commonsense realised the danger and saved himself.

The moral of the story is that it is not just enough to be knowledgeable. One should have commonsense too.

We often come across not so educated people, who achieve success in life. This is precisely because commonsense taught them a lot more than any voluminous book or hours of classroom instruction. However, commonsense is not so common.

As the English poet, Samuel Taylor Coleridge described, “Commonsense, an uncommon degree is what the world calls wisdom”.

The family connect, community living, the link with the past, exposure to literature and more than all, the oral tradition of learning in the form of stories and songs were the transmitters of such valuable wisdom through the ages. Unfortunately, the contemporary generation is deprived of such treasure troves of wisdom thus making commonsense an endangered species.

Your exposure to the world around, its places and people can be schools for acquiring commonsense and your passport to a less troublesome and rewarding future.