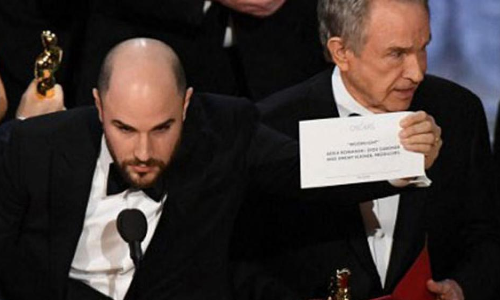 This year’s Academy Award function witnessed a goof up in the Best Film category that can be dubbed as the mother of all goof-ups in Oscar history.

This year’s Academy Award function witnessed a goof up in the Best Film category that can be dubbed as the mother of all goof-ups in Oscar history.

‘La La Land’ was mistakenly announced as the winner of the award instead of ‘Moonlight’. As the producers were giving their thank you speech, one of the organising committee members came up and pointed out the mistake.

In an age when immaculate and near-perfect event-management acumen is the order of the day, it is rather surprising that such a high profile event ended up in such an embarrassing situation for the organisers while the audience (millions were watching it live) was left shell-shocked.

Nearer home, ballot paper goof-up in the MLC polls forced fresh election as the photographs of the candidates were interchanged.

Any such scrupulously planned event can also be vulnerable to shocking mix-ups, which seemingly surface at the eleventh hour.

Such goof-ups can be described as Gen Thimayya’s Cap syndrome. In his book, ‘Trekking over Pebbles’ Dr Mohan Kanda narrates an interesting anecdote that captures the essence of it.

This is the story concerning the first Indian chief of army staff, the legendary Gen Cariappa and his deputy, Gen Thimayya.

Gen Thimayya had an appointment with his chief at 7pm on a given day. He spent a lot of time polishing brass, shining shoes and ironing the uniform. The distance to the chief’s house was measured as was the travel time.

On the appointed day, Gen Thimayya arrived as planned a few minutes in advance at the entrance of the chief’s house. He waited till the time was right, drove in, stepped out of the car and executed a perfectly practiced smart salute.

Gen Cariappa‘s response was, “Where is your cap?” In the thoroughness of the preparation for the occasion, Gen Thimayya had overlooked the most important item of his attire – the cap!

Well this can happen to anyone and everyone. We prepare a lot but forget something most essential a lapse that can destroy the very purpose of the preparation.

I am sure some of us might have forgotten our hall ticket or a pen or pencil to the examination hall. I still remember how I used to forget taking the tiffin-box to school after my mother struggled to prepare it so early in the morning. It would be terrible discouragement to any mother when her child goes hungry despite the best preparations.

Let me recall a fateful experience I encountered. My parents were celebrating house-warming function when I was in the last stage of my PhD submission. I was keen on completing the thesis and take it home to showcase my achievement to my friends and relatives during the function.

I burnt midnight oil for days together to complete the thesis ahead of the function and was so proud to carry it. As we travelled for couple hours, I suddenly noticed a serious goof-up. The title of the dissertation was ‘Socio-Political Foundations of Press’. But, I misspelt the spelling of “political as politcal".

I was simply shocked to see the mistake. Believe me I have shown the cover of the thesis to at least 10 of my friends to ensure accuracy of the title before I gave it for binding, still the goof-up happened.

I had to get down the train and return to Hyderabad to get it corrected. Thus, I could not show my thesis to anyone during the function. The occasion would never come in life. The horrifying memories remained with me.

How to avoid such a problem? Divide any task into specific smaller things. Prepare a comprehensive list of such things and follow it strictly. The check-list therapy is an effective solution. But remember the Gen Thimayya syndrome may strike you even at the stage of check-list preparation.

Once my personal assistant asked me, “Sir, why do you verify the meaning of some known words and facts too?”

I explained that it is not that I did not know, but I am a doubting Thomas. A journalist should always be like that. Question all the facts. Be skeptical and refuse to believe something without proof. This attitude may look nagging, but helps in avoiding a goof-up.

Lack of priority in list of things you have to perform leads to mixing up important and unimportant things. This may lead to committing avoidable blunders as you spend more time and energy on trivial things leaving the most pressing task to the end.

Quite often, we forget giving invitation to someone whom you deem most important. Tasks should be arranged in a descending order of priority. Such an inverted pyramid style, often used in news reporting, ensures that important things are not missed.

If you have too many things in the list, divide them into different categories and classify them separately. Never think of doing everything on your own.

Do not depend on anyone. You should personally check, at least the most significant ones. Let me recall a nightmarish experience of my childhood. My mother was ready for preparing a large quantity of papads. She suddenly realised that salt was not available. She asked me to run to a shop to get it.

The shopkeeper mistakenly gave me caustic soda instead of salt. I delivered it at home without even bothering to check. My mother in her hurry used it in the preparation. The entire exercise was not only useless but it also irritated everyone.

Don’t rush everything. A pause will help get relief from the tension. The mistake will be auto-corrected. Always be conscious of Gen Thimayya‘s cap syndrome.