Leadership is all about diagnosing the problem 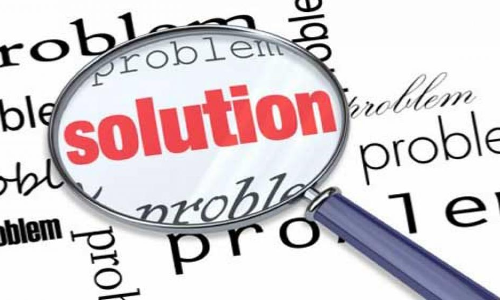 The true hallmark of any healthy organisation is in evolving leadership at all levels of hierarchy despite the imminent difficulties in achieving it. However, it is the key to success.  Hunt always for right kind of human resources to fill the leadership ladder.

The true hallmark of any healthy organisation is in evolving leadership at all levels of hierarchy despite the imminent difficulties in achieving it. However, it is the key to success. Hunt always for right kind of human resources to fill the leadership ladder.

Where and how does a leader fail? An obsession with the problem on hand than in understanding it and not focussing on the solution is a sure-shot recipe for disaster.

One often comes across team leaders who are always cynical of their colleagues. Although, demanding quality output is fine, harping too much on the low quality produced by people under you does not solve the problem.

When you are given a set of people to perform a task, your stated option would be to either get tangible results or go in for qualitative alternatives. You either change their mindset or change the whole lot.

Some leaders who are kind at heart get irritated by the quality of work their team churns out but oppose any moves to have them replaced.

They are not the hire and fire kind. The individual should understand that the employer grows only when a leader works with the head and not the heart. This does not imply that a leader should be heart-less or inhuman. No, certainly not!

But then tolerating inefficiency is not gentleness but a professional suicide. After all, the failure of an organisation displaces hundreds of people. You cannot mortgage the interests of so many people for the sake of saving an incompetent employee.

Before you take a call, exhaust all the possibilities to resolve the issue. Often, the functional system becomes orderly once the NPA is left out. Having the right person at the right place is the secret of a successful organisation.

I have seen some people get impatient at work. They blame it on an overload of work. Ironically, they remain impatient even if their burden is reduced. The reason is that the leader has failed to diagnose the complaint.

The problem is not with more work but with the efficiency to handle the workforce. It is a fact of life that subordinates often accept the work even if they are inept because it was assigned by the leader.

It is a real leadership test to judge the competence of a person. This can be made known if the leader sits with the person, understands his strengths and weaknesses and allots the work accordingly.

If you assign work to a person that does not sync with his or her capabilities, the individual is bound to fail. If your assessment is not matched by the person’s capabilities, failure is inevitable. Moreover, as a leader you cannot assign work without providing the wherewithal to handle it.

You cannot be ruthless. You have to facilitate your team members doing the work. It is the leader’s responsibility as he or she enjoys the cumulative benefit of everyone’s productivity.

Some leaders are mechanical in assessing the relative strengths of their human resources. For instance, one may be punctual but inefficient at work. There is no denying that punctuality is a virtue, but that is useless if not matched by output.

Judging people based on the amount of time they spend in their seats may prove to be incorrect. Nor is it a universal principle. A leader has to evaluate case by case to arrive at an understanding of what each individual in the organisation can do and is doing.

Yet another problem confronted by the leadership is in the choices they make, meaning favouritism. Thus also gives rise to a hostile atmosphere at the work place. In all such cases, productivity becomes a casualty.

Ultimately, if you are scared of criticism or negative reaction, you have to suffer the burden of failure. Remember, no great leader was immune to criticism. No leader is invincible. How can you spare yourself from criticism that too sitting in the leadership position?

A problem can be seen in a multiple number of ways. The way you frame the problem leads you to one type of solution. Different individuals have different perspectives for solving problems. Problem solving begins by defining it.

Read this interesting anecdote. In an office, the lift was slow. Everybody was complaining about it. The leader called for suggestions to solve the problem. Solutions poured in. They included ‘repair it’ and ‘replace it’. The solutions were costly and the budget did not permit it.

You still asked for solutions. Now the new ones included, ‘ask the youngsters to use the staircase’. Well the problem was not solved but transferred to some others. You still insisted on more solutions.

Now the suggestion was to stagger the timings of different departments in the organisation so that there will not be a scramble. Nevertheless, this solution further complicated the problem as it was bound to create many inter-departmental coordination issues. You cannot invite more problems to solve one.

Finally they invited an outsider, who did not have anything to do with the office, nor did he have any personal stakes in the solution. The suggestion was to install a mirror in the lift so that people will not get bored.

Install a mirror near the lift so that people do not feel the waiting time as everyone is excited to see one’s own image in the mirror.

Well, this might not have solved the problem of the lift, but certainly addressed the complaint.
The way you define the problem will get you the solution.