Be condemned or complimented but never be ignored 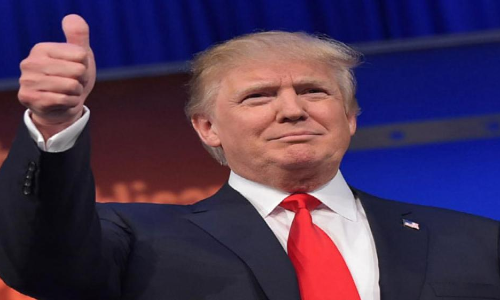 The most controversial person could succeed as he specialised in stirring a conflict. The Trump phenomenon has now become the subject of study for students of behavioural sciences and leadership studies. Success theorists started decoding the Trump triumph for possible principles to theorise upon.

Donald Trump is perhaps the most hated and most condemned but is not the most rejected individual, as many expected.

The most controversial person could succeed as he specialised in stirring a conflict. The Trump phenomenon has now become the subject of study for students of behavioural sciences and leadership studies. Success theorists started decoding the Trump triumph for possible principles to theorise upon.

Trump demonstrated the validity of the statement- condemned or complemented, don’t be ignored. It simply means there should be an engagement around you to be recognised.

This is precisely what happened during the US presidential campaign trail. The more the criticism on Trump, the more was his popularity.

Often, we become nervous at being criticised and condemned. Such sensitivity to critics keeps us off the debate. No one is above questioning.

When I was annoyed at someone talking nonsense about me for no fault of my own, a friend consoled me. Why are you so disturbed? In a country where Gandhiji was assassinated, how can you escape criticism? Engagement is critical for success.

Even the Modi phenomenon demonstrates this. Trump unabashedly continues with his forcefully put outlandish views. Reams of newsprint, hours of television prime time were used to lower his image. But, all that seems to have helped him stay the talk of the town.

All this is not to tell you to emulate or get inspired by the Trump syndrome. However, every opportunity is a learning context.

Most of the pollsters went wrong in predicting the Presidential outcome. The fault does not lie in the science of polling or the way these polls were carried out.

The fact was that the pollsters failed to assess the enormity of what psychologist call, the “Socially Desirable Responding” in vitiating poll predictions.

‘Socially desirable responding’ refers to the tendency to give a positive response. In life and at work we often seek feedback either to rectify or reinforce our choices.

We believe it to be an honest feedback. But, it need not be so. When you seek response, people tend to give you something that could be to your satisfaction.

One of my friends in WhatsApp group started posting his speeches every time. People are terribly irritated, but, still post congratulatory messages without even seeing them. Heaps of such praises are taken as compliment and he continues to do so more virulently, drawing more flak in the process.

As Trump made sexist and racist comments, women and minority electorate that normally would have voted for him never expressed their voting choice due to the phenomenon of socially desirable responding.

Observe children at home or even some of the adults. You ask them to do something. They do the exactly opposite. Behaviorist calls this ‘Psychological Reactance’.

Leslie John, an expert in behavioral decision research, defines psychological reactance as: When we feel someone is trying to tell us what to think or do, we react in exactly the opposite of what we feel we are being told to do.

The more the media pointed out inconsistencies and lies in Trump’s statements, the more it seemed to spur the engagement of his followers.

Condemned or complimented, this engagement made him popular. Donald Trump is filthy rich. Yet, the multi-billionaire is suddenly the messiah of American poor and under-privileged. Obviously, this surprises everyone. How did it happen?

Trump played to the emotions of the US working class. He represented the anger, fear and frustration. Psychology also tells you that most human beings take decisions relying on emotions rather than reasoned assessment.

You design an idea, a product or a service that caters to one’s emotions and it would be a success. In politics too, often people succeed by playing to the sentiments.

During my electioneering in 2007, I was worried when I entered the headquarters of State Road Transport Corporation as part of my campaign.

Huge posters of my rivals greeted me at the entrance. I was seen nowhere in that publicity blitz. But, when I started interacting with voters inside the office, I soon realised that I would get their votes.

One of the voters came up to me and said, “We were worried that the government would wind up our organisation. You have effectively countered the policy.

You have a place in our hearts.” I was representing their frustration that helped me win over their overwhelming support.

Trump pampering the American working millions were evident in his first Presidential speech. Good or bad, emotions are powerful motivators of human behaviour. Mind you, only logical reasoning won’t influence our decision.

We rely on emotions even while taking critical and complex decisions. There is a risk in being identified. Thus many enjoy the luxury of being ignored.

You cannot love or hate anyone unless you know him. On the other side of this spectrum, unless you are noticed, you will not be in the reckoning!

Do something to be noticed. Do it vehemently and aggressively. There is a risk of inviting murmurs of protest.

But, there is an opportunity underneath the threat. Trump’s verbose was perceived by many as something straight-from-the heart speak.

His grotesque revelations were deemed trustworthiness. Yet he took the risk of being hated, condemned and frowned upon. For good or bad, he was in the limelight and succeeded.

Moral of the story-Be condemned or complimented, but never be ignored.