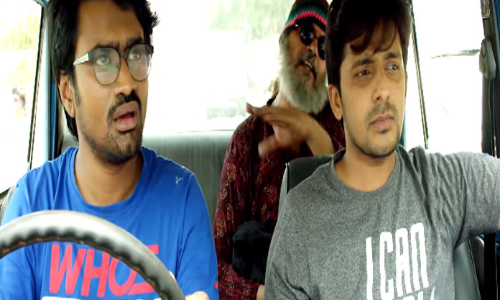 Mithai review and rating Both Priyadarshi Pullikonda and Rahul Ramakrishna have proved their talent as comedians and character artists in a bunch of movies till now Now, the actors played the lead roles in a dark comedy movie Mithaai Prashant Kumar helmed this project

Both Priyadarshi Pullikonda and Rahul Ramakrishna have proved their talent as comedians and character artists in a bunch of movies till now. Now, the actors played the lead roles in a dark comedy movie 'Mithaai' Prashant Kumar helmed this project. Prabhat Kumar under Red Ants Cinema banner bankrolled this project. Kamal Kamaraju, Ravi Varma, Arsha, Swetaa Varma and Aditi Myakal played crucial roles in this movie which finally hit the screens today. The movie unit is super confident about this movie. Let's check out the review of the film.

An IT employee Venkata Sai (Rahul Ramakrishna) loses his job right at the time when he plans to get married. On top of that, his house gets robbed, pushing him into further trouble. He also realizes that his fiance's necklace got stolen and seeks the help of friend Jaani(Priyadarshi) to find it.

Both of them starts hunting for the robber and this whole journey leads them to a crazy adventure. Will they finally find the thief? What are the hurdles they cross in this whole journey? Whom all will they meet in this ride? To know the answers to such questions, we have to watch the film.

Rahul Ramakrishna's energetic performance livens up the entire movie. He has delivered a memorable performance in the movie and will grab the attention with his performance. Priyadarshi Pullikonda is undoubtedly the show stealer for this movie. He has delivered his career-best performance in this movie. Though he got a different kind of role in this movie, he has portrayed it really well. Kamal Kamaraju's performance also added more strength to this movie. He did a convincing job portraying his role. Arsha looked pretty and promising in the movie. She not only looked beautiful but also performed really well. Swetaa Varma is perfect for the role and she breathes life into the character. Aditi Myakal delivered a decent performance. Ravi Varma and Bhushan Kalyan did their best. The rest of the cast also made their presence felt.

Director Prashant Kumar's storytelling skills are really good. Keeping the week story aside, his fast-paced narration will definitely engage the audience. He has executed the script really well. Though there are some few shortcomings, his narration will cover it up. Production values by Prabhat Kumar under Red Ant Cinema banner are decent. As it is a low budget movie, we can say that the producers have invested enough. Music by Vivek Sagar can be considered as the biggest asset for this movie. Apart from songs, the background score is also wonderful. Cinematography by Ravivarman and Neelamegam is excellent. The visuals came out good. Editing by Garry BH is clean and neat.

Dark comedies are rarely made in Telugu cinema. Thus, when the makers promoted Mithai as a dark comedy, there was much anticipation around it. But the scenario changes entirely when the audience steps into the theatres.

The film which takes off on an interesting note starts dropping slowly from there on. Better don't get surprised if viewers leave the theatre halfway through the film. Even talented actors like Rahul Ramakrishna and Priya Darshi couldn't save this movie. On the whole, director Prashant Kumar serves an age-old rotten Mithai rather than a freshly made one.