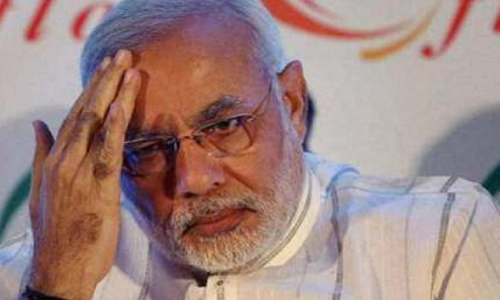 As the nation approaches 2019, political parties hostile to the Bharatiya Janata Party (BJP) are gearing up to realise their objective of a Narendra Modi-mukt Bharat. The oath-taking ceremony of new Karnataka Chief Minister and JD(S) leader HD Kumaraswamy in Bengaluru offered a perfect opportunity for almost all the anti-BJP political forces to converge.

As the nation approaches 2019, political parties hostile to the Bharatiya Janata Party (BJP) are gearing up to realise their objective of a Narendra Modi-mukt Bharat. The oath-taking ceremony of new Karnataka Chief Minister and JD(S) leader HD Kumaraswamy in Bengaluru offered a perfect opportunity for almost all the anti-BJP political forces to converge. Obviously, the BJP which was jittery over such a mega opposition unity, has been questioning the legitimacy, morality and electoral efficacy of such an exercise.

The BJP describing the united opposition as a potpourri of parties without any ideological commonality holds true even for NDA. The BJP said that all parties such as Congress, SP, BSP TMC, and Chandrababu Naidu's TDP, their ideologies do not match, but the fear of Narendra Modi is bringing them together. But, this is not unusual in India.

During the heydays of Congress, then opposition parties got united on blind anti-Congressism. But, the BJP should explain to the nation the commonality between it and its allies. The only party with which the saffron party has an ideological convergence, the Shiv Sena already declared that it would independently contest in 2019. The ideologically divergent parties like BJP and the PDP share power in Jammu and Kashmir.

While the BJP calls for abrogation of Article 370 that accords autonomy for the state of Jammu and Kashmir, the PDP wants the state to be given maximum autonomy. Similarly, the BJP allied with Indigenous People Front of Tripura (IPFT) though both these parties have diametrically opposite views on the formation of separate state of Tipraland. Yet, both these parties came together to defeat CPM.

Notwithstanding reverses in its strongholds like Uttar Pradesh, Rajasthan, Madhya Pradesh, the BJP's assertion that it would win with bigger margin in 2019 is purely in the realm of political speculation. The series of electoral reverses in Uttar Pradesh, Rajasthan, Madhya Pradesh, and even Gujarat cannot in anyway be compensated by small gains in the tiny states of North East India. The BJP cannot dismiss these electoral reverses as insignificant though they are by-elections.

Meanwhile, the BJP's claims of NDA intact are unfounded given the Shiv Sena's revolt and Akali Dal sulking, TDP estranging. In fact, allies like the PDP and even the smaller allies in Uttar Pradesh, and Kerala are uncomfortable with the big brother.

Meanwhile, Modi has been vulnerable if he is pitted against regional leaders. The election results in Bihar and Delhi since 2014 illustrate this.

Narendra Modi-led BJP finds it hard to penetrate the states which are firmly under control of regional leaders. Telangana, Andhra Pradesh, Tamil Nadu, West Bengal, Odisha are a few such illustrations.

Of course, the BJP reference to contradictions within the grand show of united opposition is undeniable. For instance, Congress is a friend to Mamata. TMC needs Congress in the battle for West Bengal. In fact, Mamata proposed a tie-up with the Congress in Tripura elections. It did not materialise because of Congress intransigence. However, notwithstanding this experience, Mamata still wants to rope in Congress for her own political ends.

BJP and CPM are her main rivals. With CPM taking a strident position not to ally with Congress, TMC finds Congress as its natural ally. TMC is locking horns with BJP and any surge in the saffron party would prove to be lethal for Mamata in the Assembly elections that follow 2019 Lok Sabha elections.

Therefore, more than the national political ambitions, Mamata would not like to lose West Bengal and shall leave no stone unturned to frustrate BJP. Any incremental addition in the form of Congress would prove to be extremely useful for TMC in the electoral arena of West Bengal.

The political picture is quite contrary in Andhra Pradesh. TDP still believes that Congress, at least in the pre-poll scenario, is a liability rather than an asset. The people of Andhra Pradesh are not yet ready to forgive Congress. TDP sources reveal that the surveys conducted by the party and the feedback from party grassroots cadre also testified to this antipathy of electorate towards Congress.

Naidu's political strategy since bifurcation is centred around the narrative that Congress has arbitrarily divided the state. The doomsday fears generated by Naidu's relentless campaign helped him to win in 2014 and TDP hopes to continue its narrative around bifurcation. The only addition to the narrative will be how the other national party, BJP, too ditched the state. Given this political milieu, it is difficult for TDP to strike a deal with Congress, at least before 2019 elections.

Notwithstanding these contradictions, it is also a fact that not only TMC, but many other parties such as RJD, NCP, DMK, SP, BSP and even the CPM are not averse to joining hands with Congress when it comes to stalling BJP assuming office.

However, the anti-BJP camp is still amorphous. The Congress is still not in a position to lead any nationwide anti-BJP front as its strength is confined to few states. But, at the same time no anti-BJP front is possible without support from the Congress as the combined strength of regional and smaller parties cannot make up for the majority in Lok Sabha. In fact, the all-encompassing unity of regional and smaller political parties is also not possible.

An anti-BJP front at this moment cannot be possible without the Congress in it. However, a lot depends on the Congress' performance in states like Rajasthan, Madhya Pradesh, Chhattisgarh, etc., where it's locked in a direct fight with BJP.

The immediate task before the parties that oppose Narendra Modi should be to ensure that the anti-BJP vote does not split in the states where the saffron party is in a winning position. The colour, odour, taste and shape of a new national coalition would only emerge after 2019 polls depending upon the arithmetic in the newly formed Lok Sabha.