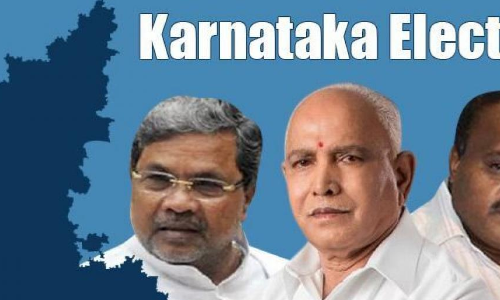 The Karnataka election has resulted in a hung Assembly.  The BJP has emerged as the single largest party winning 104 seats but falling short of a majority. The Congress was defeated, getting only 78 seats, and the Janata Dal (Secular) got 37 seats and its ally BSP won in one seat.

The Karnataka election has resulted in a hung Assembly. The BJP has emerged as the single largest party winning 104 seats but falling short of a majority. The Congress was defeated, getting only 78 seats, and the Janata Dal (Secular) got 37 seats and its ally BSP won in one seat.

The Governor is constitutionally mandated to invite the leader who can muster support of sufficient number of MLAs to form a stable government. In this specific instance, when the BJP as the single largest party is unable to get the support of other parties and MLAs, the Governor has to consider the claim of the post-election JD(S)-Congress alliance.

The Governors of respective states have done so in Goa, Manipur and Meghalaya in the recent past. A Constitutional Bench of the Supreme Court had also ruled in 2006 in the Rameshwar Prasad case that the Governor can call the leader of a post-poll alliance to form the government if he is convinced that they have the majority of legislators supporting them.

Any other course of action by the Governor would only open the doors for sordid deals and bribery to buy up legislators – something which the BJP excels in, as was shown in “Operation Lotus” in 2008. At that time, the BJP with the help of the Bellary mining mafia had bought up nearly a dozen MLAs from various parties.

However, Governor Vala has decided to swear in Yeddyurappa as the Chief Minister without ascertaining whether he commands a majority in the House. Moreover, he has given him fifteen days to prove his majority on the floor of the House. This partisan act is in keeping with his life-long affiliation to the RSS and only underscores the fact that the Governors in India act as per the ruling party dictates and not by constitutional norms.

The correct course
The Congress-JD(S) combine should have, obviously, been the first choice of the Governor to form the government for the following reasons:

1. No single party or pre-poll coalition of parties could get majority in the house. Therefore, post-poll coalition should be invited to form a government in a fractured verdict. Commonsense should prevail over convention. But, even conventions reveal that post-poll coalitions were also invited to form the government;
2.It is true that congress could not retain power. But, it is equally true that BJP could not get the mandate. The BJP with 104 MLAs cannot get the magic figure of 112 without resorting to horse-trading. The Governor in the name of convention cannot facilitate subversion of Constitution.
3. The Governors appointed during the BJP regime did not follow the principle of inviting single largest party in Goa, Manipur and Meghalaya. These immediate precedents should obviously guide the Karnataka Governor, too.
4. The BJP cannot cry foul over inviting post-poll coalition as it was the party's stand in Goa, Manipur and Meghalaya. Eminent lawyer and top BJP leader Arun Jaitley in March 2017 tweeted to this effect.
5. Inviting Congress-JD(S) combine cannot be the subversion of people's mandate as this coalition has the support of 117 MLAs and together polled 56.4% votes. On the contrary, BJP won 104 seats and polled 36.2% votes.
6. It may look politically strange for the leader of 38 MLAs to be the Chief Minister. But, the choice of leadership wrests with the coalition partners.

Earlier precedents
If a majority of elected MLAs formed a coalition, the Governor would be constitutionally right to invite the leader of the majority coalition to form the government and prove their majority within a short period, wrote Arun Jaitley in 2017 when his party-led post-poll coalition was invited to form the government in Goa despite Congress emerging as the single largest party.

The Supreme Court upheld this position in March 2017 while disposing of the petition by the leader of the Congress legislature party contesting Governor’s decision to invite leader of the BJP-led post poll coalition.

There are many precedents to this effect.

Arun Jaitley also added that similar precedents had been set in 1952 in Madras, 1967 in Rajasthan and 1982 in Haryana.

Narayanan's communiqué
The question of single largest party versus a combine with majority support had been settled by former president KR Narayanan in his communiqué in March 1998 when he invited Atal Bihari Vajpayee to form the government.

The President had said “when no party or pre-election alliance of parties is in a clear majority, the Head of State has in India or elsewhere given the first opportunity to the leader of the party or combination of parties that has won largest number of seats subject to the Prime Minister so appointed obtaining majority support on the floor of the House within a stipulated time.

SC order
Finally, the Supreme court order of March 18,2018 has cleared the mess. A bench of justices A K Sikri, S A Bobde and Ashok Bhushan said, "It is better to hold floor test on Saturday and not give any time to anyone rather than go into legality of Governor's decision to invite B S Yeddyurappa. "On what basis the Governor decides who can provide stable government on the face of a claim of majority support by single largest party and on the other a written support of majority to Congress-JD(S)? No doubt it is ultimately a number game and Governor is to see which party commands majority support," said the bench.
SC barred the Governor from nominating any Anglo-Indian community member as MLA till the floor test is over. It asked the Yeddyurappa government to refrain from taking any major policy decision till the floor test is concluded.

Thus, the Apex court order is a clear indictment of Karnataka Governor's decision to invite BS Yeddyurappa to form the government.

The Supreme court by ordering floor test on March 19,2018 has drastically reduced the 15-day window given by the Governor to newly-crowned BJP Chief Minister B S Yeddyurappa to prove majority. This is a clear validation of fears of horse trading.

The court has also not endorsed Governor's decision. But, the apex court refused to interfere in the process of forming government that has been set in motion by the Governor only to respect the separation of powers which constitutes the basic structure of the Constitution. This is evident from the fact that the apex court made it clear that it would deal with the constitutionality of the Governor's letter inviting Yeddyurappa to form the government later while allowing the BJP Chief Minister to face the floor test. The top court has further clarified that the swearing-in and government formation would be subject to the final outcome of the case.

Thus, the Supreme Court orders choked the BJP from engineering political defections to manufacture a majority. Thus, Yeddyurappa was compelled to exit paving the way for the post-poll coalition to take over the reins of elected dispensation in Karnataka today, pooh poohing the single largest party thesis.