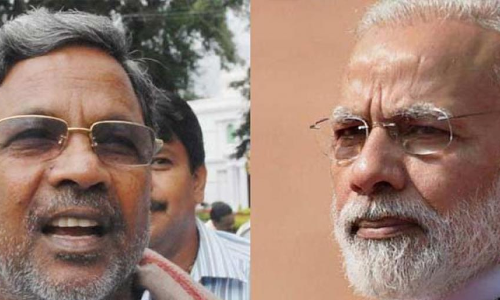 As the BJP tries to convert the Karnataka poll into Modi vs. Rahul contest, Congress intends to make it Siddaramaiah vs. Modi. This perfectly fits into Siddaramaiah's politics of north-south divide and Kannada identity card. However, both parties are responsible for converting elections into a personality conflict rather than a polemical fight over public issues.

However, BJP is unwilling to see Karnataka poll battle as one between Prime Minister Narendra Modi and the Chief Minister Siddaramaiah. Instead, the BJP leadership loves to convert the election battle in the south of Vindhyas into Modi vs. Rahul Gandhi. BJP that won the Gujarat elections by this formula wishes to repeat the same in Congress-ruled Karnataka.

With Narendra Modi being brought to the centre-stage of electioneering in Karnataka, the BJP attempts to redraw the contours of poll landscape. First, the BJP and the Prime Minister are trying to convert the electoral battle from Siddaramaiah vs. Yeddyurappa to that of Modi vs. Rahul.

Secondly, Prime Minister by showering praises on HD Deve Gowda wants to extend a hand of friendship to JD(S) for a post poll tie-up and send a message to JD(S) voters to vote for BJP to defeat Congress where Deve Gowda's party is weak. By embracing tainted Gali brothers, the BJP demonstrated that it would leave no stone unturned to wrest Karnataka even at the cost of undermining its anti-corruption national political narrative.

The electoral polarisation is not for or against Modi in Karnataka. It's more like a referendum on Siddaramaiah. Local issues dominate regional political discourse of Karnataka. Modi factor did not work in Delhi and Bihar as regional idiom dominated the political scene led by the regional satraps. The cast-ridden Kannada social landscape gives primacy for social engineering rather than Modithva.

The BJP's chief ministerial candidate Yeddyurappa also suffers from anti-incumbency more than the Chief Minister, thus making it difficult for Narendra Modi to sell the local saffron face. Prime Minister did not even hesitate to use the solemn occasion of addressing the Indian diaspora in London to cater to the domestic audience in Karnataka elections.

His reference to Basaveshwara is a clear attempt to appease the Lingayats in the poll-bound Karnataka, whom the BJP fears may shift to Congress over the 'Not Hinduism' issue. Lingayats constitute about 17 per cent of Karnataka population and their voting preferences are estimated to influence the verdict in about hundred constituencies in a state legislature which has a total strength of 224 seats.

The other influential segment of Karnataka electorate, the Telugu voters are angry with Narendra Modi for denying Andhra Pradesh the special category status. Several Telugu associations and political groups have appealed to the Karnataka Telugus to defeat Modi, a call that would obviously benefit Siddaramaiah.

After merging with the Indian union, the region was part of Hyderabad State until 1956. The Hyderabad Karnataka/Northeast Karnataka region comprises Bidar, Yadgir, Raichur, Koppal and Gulbarga of Hyderabad state and, Bellary of Madras state that are in the present state of Karnataka.

Besides, thanks to the growth of information technology in Bengaluru, which is considered as the Silicon Valley of India, a large section of Telugus live in the capital city of Karnataka. There has been a migration of agricultural communities from Telugu regions to several districts of Karnataka.

Telugus living in the neighbouring states never nursed linguistic, regional political aspirations and became an integral part of social and political life of those states. But, the blatant denial of special status to Andhra Pradesh and with the two Telugu regional parties in power and even the opposition taking a strident anti-BJP position, Telugus have started getting alienated from the saffron party . This is likely to prove costlier for the Modi brigade in the ensuing Karnataka elections.

As the Karnataka poll battle turns into Narendra Modi-Siddaramaiah personality clash, BJP suffers from a deficit which Congress had in Gujarat. Unlike in other states where BJP relies on the Modi cult, the saffron party plans to win the Karnataka poll riding on the popularity of Lingayat icon BS Yeddyurappa despite his tainted image.

Yeddyurappa's 'ghar wapsi' helped BJP in 2014 prompting the party to depend upon the same social engineering model. But, Siddaramaiah cleverly discounted the Yeddyurappa factor by rallying Lingayats on religious identity card forcing BJP to bring in the Modi factor into a south Indian state where 'Kannadiga Asmitha' is assiduously cultivated by its political patrons.

The state has distinct geographical regions with varied economic and political landscapes. Baring coastal Karnataka, in other regions of Karnataka, more than the religion, caste appeal seems to be more effective.

Siddaramaiah has mastered this social engineering called Ahinda philosophy. Ahinda is a Kannada acronym for minorities, Backward Classes, and Dalits. Through clever budgetary provisions and cultural engineering in the form of celebrating the anniversaries of OBC icons, besides Tippu Sultan, Siddaramaiah has put this Ahinda politics into practice.

Siddaramaiah said that Ahinda as a socio-political philosophy can be used as a tool to prevent youths from Backward Classes and Dalit communities from joining the Modi-led Hindutva brigade. Thus, Siddaramaiah's social engineering can prove to be an effective antidote to Modi's Hindu nationalist narrative.

Modi's pet election theme is to promote himself as a messiah of development euphemistically called the Gujarat model of development. But, Siddaramaiah effectively counters this with his welfare economics, which critics may dismiss as political populism.

But, his schemes like free rice, subsidised farm ponds, etc, have cut ice with the people as several regions of the state are economically backward and such sops certainly matter in elections. The election is for the Chief Minister's gaddi. Modi's proxy cannot be Modi. This was the tactics RK Hegde adopted against Rajeev Gandhi when the latter could attract large crowds. Siddaramaiah wishes to repeat this.