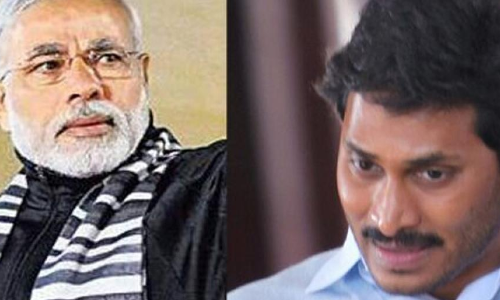 The politics of Andhra Pradesh are revolving around the no-confidence motion. Both the ruling and the opposition parties in Andhra Pradesh are competing to capitalise on the public sentiment over the perceived injustice to the state of Andhra Pradesh, despite the fact that the bifurcation was thrust on the people of this region against their wish.

The politics of Andhra Pradesh are revolving around the no-confidence motion. Both the ruling and the opposition parties in Andhra Pradesh are competing to capitalise on the public sentiment over the perceived injustice to the state of Andhra Pradesh, despite the fact that the bifurcation was thrust on the people of this region against their wish.

Strange somersault
Jaganmohan Reddy who only in the recent past extended unconditional support to BJP-led NDA in the presidential and vice-presidential elections is now talking about lack of confidence in the NDA government. Jaganmohan Reddy who had displayed so much confidence in the leadership of the Prime Minister that too in crucial elections could conveniently change his tone and tenor.

Jaganmohan Reddy is emphasising on the Special Category Status to Andhra Pradesh as promised by the then Prime Minister Manmohan Singh in Parliament. His party would move a no-confidence motion against the Modi government, precisely questioning the failure of the BJP-led NDA government in which TDP is a partner, to fulfil the promised Special Status to Andhra Pradesh.

Chief Minister Chandrababu Naidu has become vulnerable as he not only endorsed the Centre's proposal to offer special package in lieu of special status but has even praised the former. The YSR Congress is now all set to use the no-confidence motion to press for Special Status, thus compelling Chandrababu Naidu to once again demand the Special Status. But, the TDP lost its moral high ground as it avidly accepted a Special Package.

Cornering TDP
The idea is not to cause any major embarrassment to the BJP but it is a clever bid to corner the TDP as it is a part of NDA. The YSR Congress has nothing to lose by moving the no-confidence motion in Lok Sabha. But, Chandrababu Naidu can do it only after deciding to come out of NDA, a decision which he is yet to make. Realising Chandrababu Naidu's dilemma over snapping ties with BJP, Jaganmohan Reddy is planning to move the no-confidence motion before TDP takes a call.
Jaganmohan Reddy's single point agenda seems to be ensuring the split in BJP-TDP alliance. Even today he does not categorically state that his party will not have any alliance with BJP before or after 2019 elections.

Naidu's dilemma
Alliance with Modi was the critical factor in reaping the mandate in 2014 as the margin between TDP and YSR Congress was a mere two percent. Naidu is unable to come to a firm conclusion on the cost of severing ties with the BJP, especially when the Assembly elections are coterminous with Lok Sabha elections and the possible impact of the national political mood cannot be completely ruled out. That too with the opposition YSR Congress ready to have a tacit understanding with the BJP, Naidu is justified in being doubly cautious.

TDP restless
Massive hostile perception is strengthening among the electorate that the state is getting step-motherly treatment under the NDA dispensation. The TDP is seriously wary of the possible political fallout of such a perceived discrimination in the Union Budget 2018.

Rethinking in TDP
With the recent decline of BJP, evident from the Gujarat polls and more so in the recent Rajasthan bypoll, the TDP leadership is toying with the idea of estranging BJP. Thus, this political backdrop fuelled fresh round of TDP-BJP confrontation.

BJP politics
The BJP is pursuing a policy of dual containment of regional parties. While sailing with TDP, the saffron brigade has also reached out to the Opposition leader YS Jaganmohan Reddy. The YSR Congress has lent an unconditional support to BJP-led NDA nominees in both the presidential and the vice-presidential elections, despite the presence of its arch-rival TDP in the alliance.

The BJP having no electoral stakes in Andhra Pradesh and the fact that either of the regional parties contending for power will be joining the NDA are considered to be the reasons why the Modi government is unconcerned over the ongoing unrest in Andhra Pradesh.

Strategy behind
Chandrababu Naidu's latest tirade over BJP is a strategic masterstroke to convert a threat into an opportunity. This is precisely what he did in 2014. Even after supporting the bifurcation of the state, Naidu ran a propaganda blitz calling bifurcation a blunder and reaped a huge political dividend. Now, Naidu is trying to grab even the opposition space yet again converting a threat into an opportunity on the question of perceived injustice to state.

As this author observed in his article, ‘Chandrababu Naidu’s Comeback,’ in Economic & Political Weekly, "the bifurcation of the state seems to have benefited TDP more than any other party. The role played by Chandrababu Naidu during the last episode of bifurcation drama earned him goodwill with the electorate in the Seemandhra region, especially among the urban and middle-class voters.

The strategic moves of Naidu in the name of equal justice for both regions created a perception among the Seemandhra voters that he was trying hard to prevent the division of the state... Chandrababu Naidu demonstrated consummate political skills by arriving at an early understanding with the Narendra Modi-led National Democratic Alliance (NDA) and converted the threat into an opportunity."

This backdrop of 2014 was, perhaps, the reason behind Naidu not raising a storm of protest for last four years despite Modi government being not so kind to the state. But, this has created a strong perception that Naidu is compromising the interests of the state for his political purpose. Though the opposition leader, Jaganmohan Reddy, tried hard to expose this, his tirade over Naidu failed to give him that much sympathy as he failed to be critical of Modi dispensation.
YSR Congress' inability to blast BJP, not only failed to create anti-Naidu sentiment but in fact, helped the latter to convince the people that he is working hard to negotiate a better deal from Centre.

Sensing possible antipathy due to his party sailing with BJP which reneged on its promises to Andhra Pradesh, Naidu raised his banner of protest. Enacting a strange spectacle, the TDP MPs who constitute the ruling alliance protested against the NDA government itself in Parliament. Thus, it appeared as Naidu's bid to grab even the opposition space as Reddy scores a self-goal by displaying intransigence over Modi government's response to demands of Andhra Pradesh.

Jagan's salvo
Jaganmohan Reddy has fired a salvo at Chandrababu Naidu by declaring that his party would move no-confidence motion against the Modi government on the question of Special Status, compelling Naidu to take a stand. Now Naidu has to give up his 'to be or not to be' syndrome in regard to his relations with BJP. He is also forced to talk about Special Status again, the idea which he has abandoned for Special Package. Thus, Jagan Reddy could irk Chandrababu Naidu.

But, the YSR Congress chief for no worthwhile reason to explain said that he would move the motion in the last week of the budget session, knowing fully well that such an attempt may not be so useful in the last days of the session. Perhaps, this is an attempt to prevent any embarrassment to Modi but accomplish the objective of putting Chandrababu Naidu in the dock.