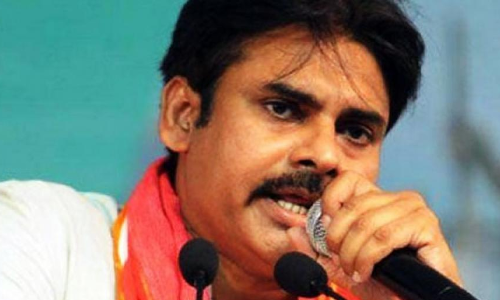 Pawan Kalyan has sent three precise political pointers through his recent visit to Andhra Pradesh and the comments made therein. Firstly, he revealed that the BJP chief Amit Shah invited him to merge his Jana Sena into BJP. Yet, he chose to stand on his own to \'question people in power \'.

Pawan Kalyan has sent three precise political pointers through his recent visit to Andhra Pradesh and the comments made therein. Firstly, he revealed that the BJP chief Amit Shah invited him to merge his Jana Sena into BJP. Yet, he chose to stand on his own to 'question people in power '.

Secondly, he seems to be not so critical on TDP and its supremo raising scope for myriad interpretations on the future course of political developments in the State. Thirdly, he chose the occasion to question the opposition YSR Congress. This, seen together with a second pointer, further gives scope for intense speculation.

Where does Pawan wish to position himself in the emerging political landscape of Andhra Pradesh? Referring to the failure of the opposition, he puts forth an interesting logic. When he could get some of the issues solved by representing them to the Chief Minister, why can't the opposition does so?

But, such a defence cannot strengthen his credentials as an opposition leader. Pawan should realise why is he able to get such an audience with the Chief Minister, who refuses to hold even all-party meetings to discuss people's issues. Not just the YSR Congress, no other opposition party enjoys the kind of reception which Pawan commands at the Chief Minister's Office.

The self-congratulatory tone of Pawan Kalyan is either bereft of any political understanding or is a calculated political pronouncement aimed at defining his role in State politics. Chandrababu Naidu being a master strategist still considers Pawan as an ally and even a possible electoral partner in 2019. The moment Naidu gives up on this line of thought, Pawan will cease to be a special invitee in the corridors of power at Amaravati.

Chandrababu Nadu is still unsure of his bonhomie with the saffron brigade. To go or not to go with the BJP still remains an undecided aspect in TDP's electoral strategy for 2019. It all depends on the extent of influence that the Modi factor can hold on the voters and to what extent the people of Andhra Pradesh would forget and forgive the injustice meted out to them by the BJP-led NDA government at the Centre. Thus, Naidu pursues a carrot and stick approach. He continues to air his disappointment over the way Centre is treating the state especially with regard to the special category status and Polavaram. But, he doesn't want to throw the baby along with the bathwater.

In case Naidu chooses to dispense with BJP considering Modihomie as a liability, Pawan would be of immense help to him. The actor is already ventilating a similar sentiment as far as the special status is concerned. Chandrababu Naidu is perfectly justified in strategising for 2019 polls. But, why should Pawan play to Naidu's tunes. Is this an expression of political innocence or an acknowledgement of a political retreat?

Pawan should understand that he cannot be a champion of masses by mere political lobbying due to his personal chemistry with the Chief Minister. He needs to spell out where he and his party stand vis-a-vis Naidu administration. Its rather strange to hear from a political leader that he is not keen on Chief Minister's office. It is like playing cricket without aspiring to win. Politics cannot be ‘benefit matches’ where the outcome of the match is of any significance.

But a sympathetic interpretation for Pawan's attitude can be as follows. Perhaps, there might be a reason for his cautious approach in his response to Naidu governments’ policies and programmes. He is fully aware that the discontent against Naidu regime is yet to crystallise and he may perhaps be unsure on how people would react if he goes on a full-throttle attack on TDP rule.

However, the opposition YSR Congress still seems to be firmly holding the view that Pawan Kalyan is TDP’s trump card. Only further actions and polemics of the Jana Sena chief could prove or disprove this politically motivated assessment. It is a politically inspired estimate precisely because whether or not Pawan Kalyan is acting at the behest of TDP, the fact remains that his powerful entry into Andhra Pradesh politics would certainly harm the interests of YSR Congress as it hopes to monopolise any possible rise in people’s discontent over Naidu dispensation.

Meanwhile, Pawan is certainly politically wise in not committing the blunder which his brother did. Any merger of Jana Sena with BJP would be catastrophic for Pawan whose political image was enhanced when he chose to distance himself from the Prajarajyam fiasco.

But, the BJP would love to rope in Pawan Kalyan to realise its objective under Mission -7, its political plan to gain formidable foothold in seven States so as to compensate for the possible reverses in the North where it had a saturated mandate in 2014.
But, Pawan has not favoured the idea despite of his personal chemistry with Prime Minister Narendra Modi and chose to launch his own regional party. His latest political statements further indicate that the Jana Sena chief is not keen on forging any understanding with the saffron party. All this is not without reason. Pawan seems to be relying on his own calculations.

The BJP lacks leadership of some stature in the State. Pawan enjoys personal chemistry with Modi. In case of fruition of BJP-Jana Sena alliance, Pawan Kalyan would be its Chief Ministerial candidate. But, despite such advantages, there are many a slip between the cup and the lip.

The more important aspect is how the Centre’s intransigence, especially in regard to blatant denial of special status would actually play up the public sentiment at the hustings is still anybody’s huess. With the bipolar character of Andhra Pradesh polity, BJP in any case has to settle for a junior partner status with either of the regional parties. This idea is obviously unpalatable for Pawan Kalyan, who cannot reconcile to any secondary status.

His association with the TDP-BJP during 2014 polls obviously raises the question over his future relationship with these two parties. Even when the relationship between TDP and BJP is unpredictable, it’s too early to speculate on Pawan Kalyan‘s calculations.

But, the Pawan factor certainly matters for TDP in its bid to retain power in 2019. It may find it difficult to target Pawan Kalyan. His unequivocal and unconditional support to TDP-BJP combine helped to an extent to define the 2014 verdict. The Pawan Kalyan support factor contributed to the drift of Kapu voters towards the TDP-BJP combine. Thus, Kapus for the first time in three decades voted in such large numbers for the TDP. This is evident from the fact that TDP won overwhelmingly in the constituencies where Kapus are numerically strong, though it’s erroneous to construe Pawan phenomenon as Kapu resurgence as the popular film star has following across social and regional loyalties.

He has not expected anything in return for the support he lent to TDP-BJP combine in 2014. This allows him to raise questions over the performance of the ruling combine and makes it difficult for the latter to question him. This is perhaps the reason for the TDP leadership to take every precaution while dealing with Pawan. But, it is incomprehensible why Pawan Kalyan fails to seriously question and take on the TDP regime if he is really serious to present himself as an alternative to Naidu dispensation.

One thing is sure for now. Pawan would like to plunge into active electoral politics and test political waters with his Jana Sena. However, what is not yet clear is who will be his political friends and foes. The political equations have a strange character of undergoing swift and steady changes to suit the particular political context in which various political parties interplay.