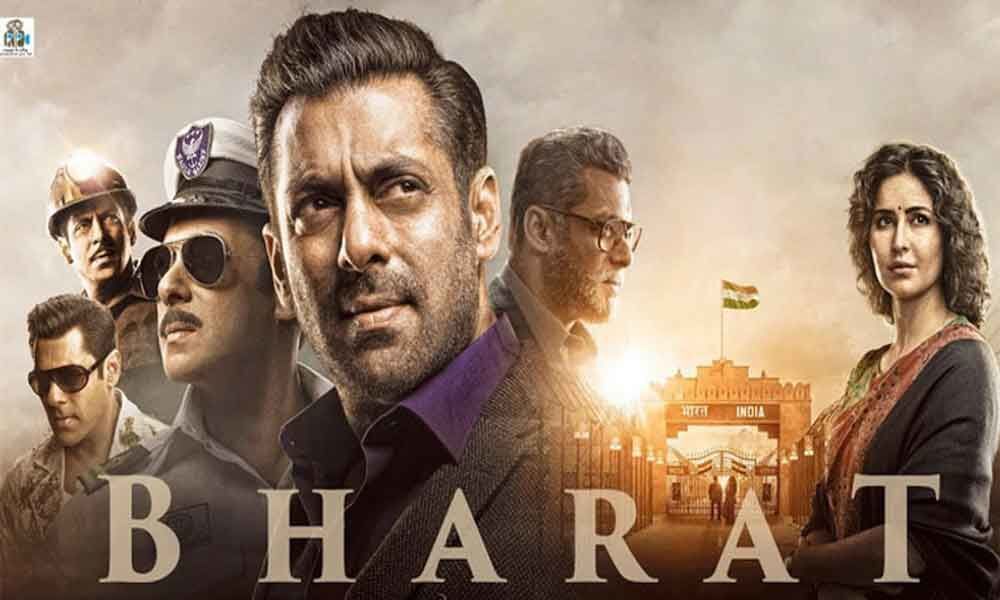 Salman Khan returns to the big screen this Eid with Bharat, with Katrina Kaif. Director Ali Abbas Zafar makes full use of the superstar's strength in the film and gives his fans Bharat, a character to take home with them.

Why do people go to see a Salman Khan film? You will not find the answer to that question in the reviews of his films. You will find the answer to that question in a single screen theatre, on Eid morning, as boy after boy hoots, cheers and screams his lungs out for this one man. Upar Allah, neeche dharti, beech mein tera junoon. It is that junoon that makes a Salman fan get out of her or his home on Eid day and watch their superstar on the big screen. One more time. Year after year.

And Salman Khan, true to his self and this love, delivers. In Bharat, Khan laughs, cries, dances, sings, fights, loves... and gives his fans just the perfect Eidi after 2018's disaster Race 3.

In 2019, Salman Khan is Bharat. A 70-something man who is celebrating his 70-something birthday. 60 ke baad 70 ya 75, kya fark padta hai! Our hero is in his special suit, has his Madam-Sir by his side. She calls him 'Sexy', he blushes. His family takes off to the Wagah-Attari border to cut his cake. This 'sathiya-gaya-hua buddha' wants to cut the cake as the train from Pakistan crosses into India.

On August 15, 1947, when Bharat stepped into the newly-formed Hindustan from Mirpur, Pakistan, on board a train full of refugees, he decided to make it his birthday. Bharat the film and the man are both driven by a strong story of separation. And director Ali Abbas Zafar makes complete use of the Partition as a subject to bring tears to your eyes. Special mention to guest star Tabu here. In her one scene, she makes you break down. Salman, on his part, has to do a lot of weeping to get you to shed a tear for him.

As his family members gather around him, waiting for the train that is four hours late, Bharat tells his story. We learn of his promise to his Bauji (Jackie Shroff in a memorable role). Through the years since 1947, that is the albatross around Bharat's neck. That is both his burden and his hope. Ummeed. Hope. The one thing that keeps people alive.

Through the eyes of Bharat, we see the journey of Bharat, our country, through some of its best and worst phases. Director Ali Abbas Zafar manages to capture in 2 hours and 47 minutes the ups and downs that this man and his country wade across. The best part of Bharat the film is that it has something for everyone. It is the quintessential Big Salman Khan Film with all its trappings. Romance, comedy (and a lot of it, thanks to Sunil Grover), drama, action, emotion.

Salman plays to the gallery in every frame from beginning to end. He, off screen as on it, makes no bones about what he promises. He makes films so people go in and feel happy. With Bharat, Salman Khan gifts his fans the perfect Eidi. Whenever life gets tough, you should have some sweets, Bharat's father tells him. Salman Khan the superstar too, seems to have imbibed that lesson before signing Bharat. His last two Eid releases were damp squibs. In 2017's Tubelight, people could not accept him as a simpleton. In Race 3, people could not accept anything. With Bharat, Salman corrects his mistakes. Ali Abbas Zafar, credited with writing, story and direction, does not let Salman down. But the film tries to pack in so much that you start fidgeting after a point.

Salman Khan tries his best to play his various avatars. At 20, he brings the circus and its Maut Ka Kuwa to you. At 30, he is in the Middle East, rescuing people from near-certain death and romancing his Madam-Sir. He is then winning over Somali sea pirates with Amitabh Bachchan songs when not dancing in Punjabi in the streets of Malta. And he is also sitting in front of a television set and breaking down. If with Sultan, Ali Abbas Zafar put Salman through a rigorous physical test, in Bharat it is a test for Salman's expressions. Khan doesn't disappoint. Not his fans, any way.

Katrina Kaif gets the meatiest role of her Salman-Khan-film-career. That crown of perm in place, Katrina's hard work is visible in Bharat. As the strongheaded and strong-willed Kumud/Madam-Sir, Katrina sinks her teeth into her role. But the star of this show is Sunil Grover. The Vilayti to Bharteya, Grover brings his impeccable comic timing to Bharat, making the film palatable. You will take some time to digest Sonali Kulkarni in the role of Salman Khan's mother. Disha Patani doesn't really get a role to write home about.

Bharat has its own share of problems, beginning with the near-three-hour runtime. But when people wait a year for a Salman Khan Eid release, can you really blame the superstar for giving his fans their larger-than-life hero in an out-and-out entertainer, replete with song and dance?