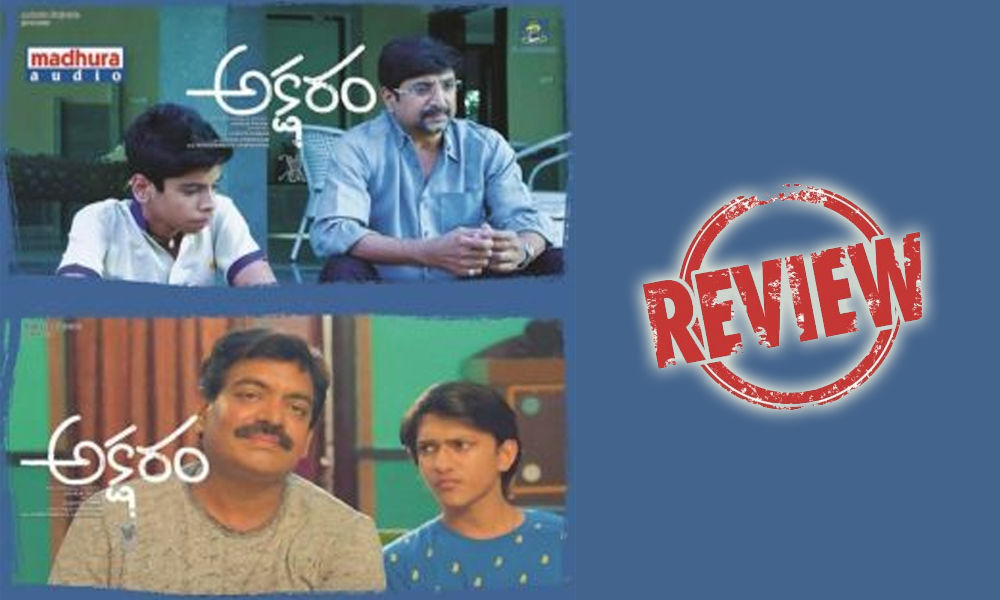 Education shouldn't be a luxury, it is a necessity. Great Leaders and reformists like Veeresalingam Panthulu, Swami Vivekananda, B.R Ambedkar believed ...

Education shouldn't be a luxury, it is a necessity. Great Leaders and reformists like Veeresalingam Panthulu, Swami Vivekananda, B.R Ambedkar believed in the notion that education is for all. They did not just say it but also tried to act on their words. This film tries to show how their lofty ideals have become just ideas for future politicians and education became business. Let's see how Aksharam landed the most important message ...

The movie reveals around a father (Sivaji Raja), a child and a prostitute who all are looking to somehow find that one way to study and find themselves moving ahead. It talks about the educational system that is killing the real purpose of it all with donations. Rather we telling you entire plot, it would be better if you watch the film.

Film belongs to Sivaji Raja. Yes, even though there are scenes for a young boy and scenes for a lady, which just move you to tears, it is Sivaji Raja, who delivers the best possible performance. He steals the show in the climax with his superior skills to emote.

Jackie acts well in an inspector role and Lohit is also very good in few scenes. It is heartening to see Ranganath again on screen even brierly. All others are to immature but they tried their best.

Kunapareddy Jayakrishna's cinematography in the budget given to him, is good. He doesn't deliver any ground breaking visuals but brings a texture to the proceedings by his staging and framing.

Sashi Preetham's music is not up to the mark that the movie aims for. Still, it serves for the budget and his BGM in climax is apt for the scene.

Kiran Reddy as an editor needs to concentrate on how to smoothen the cut and give the entire footage a good rhythm. His work is not bad not good too.

Jackie Thota as a director used all his experience to concentrate on the scenes that really deliver the punch. He did show some weaknesses in handling comedy but he delivered the emotional punch very well. He did not prefer sleaky edits at unnecessary places and we can see that if he is given budget and opportunity, he can handle a scene even better.

Also, his style of narrative seems to follow classic style of directors than just contemporary. He delivered a mix of both worlds. He never let the movie deviate from the message it aims to tell and concentrated more on the emotional depth in the climax. While at times, the script feels bit under developed, he manages to let us all forget such small problems with depth.

Movie doesn't follow a fixed pattern. It tries to deliver in the limited resources it has and one feels the idea they took seems too big and too lofty. Yet, the depth in the story and the message that there is a need for looking at the education system and reforming it, is praiseworthy. We don't really look at the actors and their maturity after 30 minutes into the film, as seasoned performers like Sivaji Raja and Jackie, himself, deliver good enough performances to hook us.

Movie is not your typical 'prime' or 'netflix' film or documentary. It takes some characters that we hate to talk about and presents them boldly with a conviction of its own. Just for the message they tried to deliver you can watch the movie, neglecting all the shortcomings.