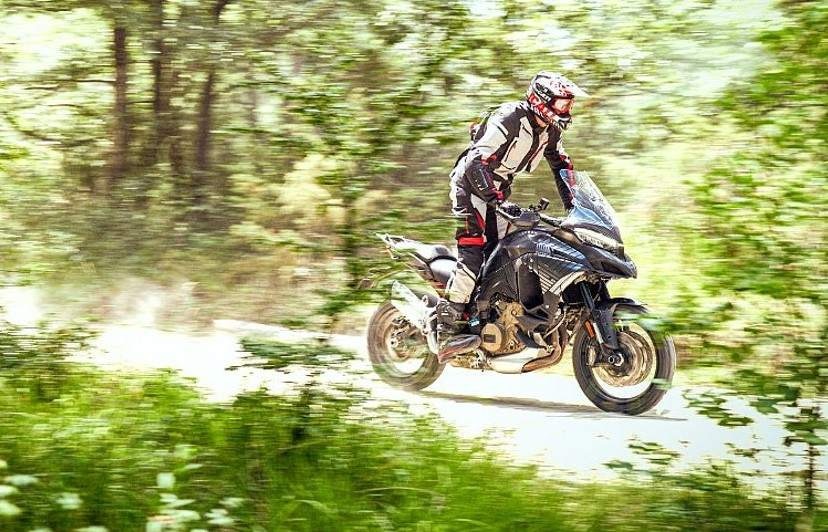 The new 1158cc V4 Granturismo motor is exceptionally light and compact compared to the 1260cc DVT V-twin it replaces. This Euro-5 compliant motor is 85mm shorter and 94mm lower. Despite having two cylinders per bank, it is just 20mm wider than the V-twin. It is even 1.2kg lighter than before. Ducati has tightly packaged the new motor to make this possible. For instance, the water pump sits between the banks of the liquid-cooled motor, reducing the amount of plumbing required to circulate coolant. It also uses racing-style semi-dry casing lubrication that eliminates the need for a larger oil sump. The new motor delivers 170PS at 10,500rpm and 125Nm at 8750rpm. While it does not break the 200PS barrier, the new motor delivers 2Nm more torque than the Ducati Streetfighter V4 that too 2750rpm lower in the rev range. The new motor now offers a more linear power delivery and has a smooth spread of torque across the rev range. The service interval now stands at 15,000km or two years. Even more impressive is the desmodromic valve clearance service, which is now 60,000km apart! The motor uses electronic throttle bodies for smoother and precise power delivery. Thanks to a twin pulse firing order, the motor sounds more like a V-twin and offers a more immediate throttle response. The counter-rotating crankshaft, first seen on the Ducati Panigale V4, counters the gyroscopic effect of the rotating wheels and improves handling. Ducati has also included rear cylinder deactivation tech that shuts down the rear cylinder bank at low speeds. This effectively turns the four-cylinder motor into a twin-cylinder motor and helps improve fuel economy as well as engine heat. When the Ducati Multistrada was first launched, it turned the concept of touring on its head. The upcoming Multistrada V4 seems to revolutionise the touring game. We expect Ducati to launch the Multistrada V4 in India sometime next year.